NEWS: Having a Mary Heart in a Martha World Surpasses One Million Copies Sold 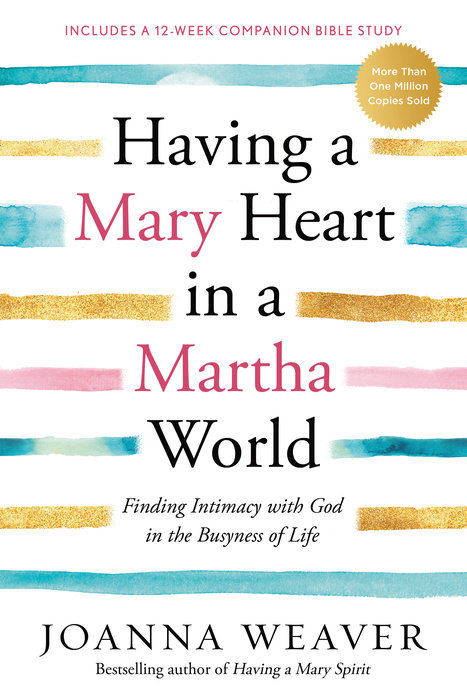 The perennially favorite womens book, Having a Mary Heart in a Martha World by Joanna Weaver (WaterBrook Press), has sold more than one million copies and has been honored with the ECPA Platinum Award.  Originally released in 2000, Weavers CBA and Publishers Weekly best-seller on the sisters of Bethany, Mary and Martha, has become a cherished resource for womens Bible study groups.

Having a Mary Heart in a Martha World immediately struck a chord with women who felt the conflict between wanting to sit at the feet of Jesus and the demands of a busy worldjust like Martha and Mary thousands of years ago. Weavers book is an invitation for women who feel they arent godly enough, loving enough or doing enough.

It all began with the desire to write biblical fiction. Ive always been fascinated by the story Mary and Martha in Luke 10, but as I looked at the rest of the story found in John 11 and 12, I realized that there was much more than just a novel in these two sisters from Bethany, said Weaver.

After a year of insomnia and living in a wind tunnel of words, I remember praying two things as I wrote Having a Mary Heart in a Martha World1) Oh Lord, let it make sense! and   2) Somehow use it for Your glory. Its pretty amazing how God takes what we put in His hands and uses it in ways we could have never imagined, Weaver added.

Having a Mary Heart in a Martha World was one of those books that just resonated with women, says Stephen W. Cobb, president and publisher of WaterBrook Multnomah.  We knew from the start that we had something special with this title and with Joanna. Were proud to see it reach such a significant milestone and that the book is as meaningful to women today as when it came out 14 years ago.