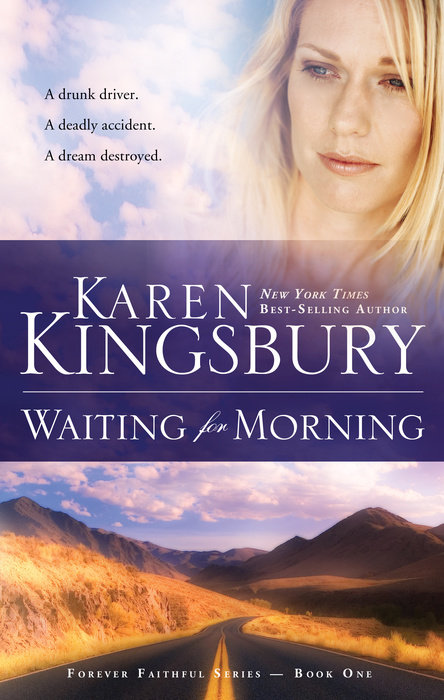 Part of the Forever Faithful Series

About Waiting for Morning

As Hannah Ryan waits for her family to return home from a camping trip, she realizes she has everything going for her—a husband other women admire, two charming teenage daughters, and a loving Christian home. As the sunny afternoon turns into twilight, her uneasiness grows along with the shadows. Then a car pulls into Hannah’s driveway, bringing two police officers...and devastating news that shatters her life forever.

In the days that follow, Hannah struggles with unspeakable feelings of sorrow and rage—feelings that fuse into one chilling purpose for living: revenge against Brian Wesley, the drunk driver who has caused all her pain.

In her fury, Hannah shuts the Lord out of her life. She’s determined not to forgive Wesley or the God who allowed this tragedy to happen. Can two caring people help Hannah rediscover her faith...before bitterness destroys her?

Karen Kingsbury is one of America ’s favorite inspirational storytellers, best known for her Life-Changing Fiction™. She is the author of more than thirty emotionally gripping novels, many of which have been adapted for film and television. Previously a staff writer for the Los Angeles Times and a People magazine contributor, Karen lives with her husband and six children in the Pacific Northwest .

Also in the Forever Faithful Series

When childhood friends Jade and Tanner reunite as adults, they share their hearts, souls, and dreams of forever–until a fateful decision tears them apart. Now, nearly a decade later, Jade’s unfaithful husband wants to destroy her in a custody battle that is about to send shock waves across the United States. Only one man can help Jade in her darkest hour. And only one old woman [ … ]