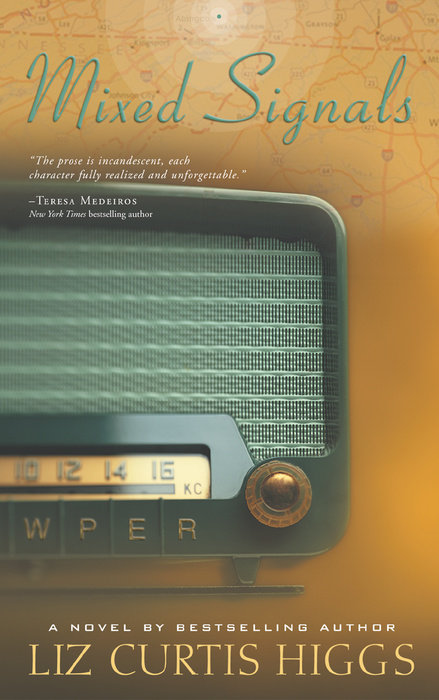 Love Is on the Air

Belle O’Brien, the woman behind the warmest voice in Virginia radio, has one problem: Her oldies show on WPER-FM is a solid-gold hit, but her love life, at thirty-two years and counting, is an off-the-charts disaster. The pickings are slim in small-town Abingdon. Will it be smooth-talking Patrick Reese, the man who launched her radio career a decade earlier? Moody but handsome David Cahill, the chief engineer with a mysterious past and a new life in Christ? Or Matthew the Methodist, her pastor across the street? Surrounded by an on-air cast of colorful characters, Belle’s journey toward joy is filled with humor, heartache, and endless surprises. Norah Silver-Smyth, her friend and encourager, will join Belle in discovering that it’s never too late to listen to your heart.

“One of the most delightful surprises I’ve had all year—

a first novel that moved me to both laughter and tears!”

Belle O’Brien, the woman behind the warmest voice in Virginia radio, has a problem: Her oldies show is a solid-gold hit, but her love life is an off-the-charts disaster.

Her prospects for a husband are small-town slim. Will it be smooth-talking Patrick Reese, who launched her radio career? Moody but handsome David Cahill, WPER’s enigmatic broadcast engineer? Matthew the Methodist, her oh-so-available pastor? Or the mysterious radio listener who signs his letters, “All Ears in Abingdon”?

As Belle embarks on a journey toward joy, Norah Silver-Smyth, proprietor of The Silver Spoon, cooks up her own delicious recipe for happily-ever-after in this winsome tale filled with humor, tenderness, endless surprises…and two happy endings!

“Christian fiction isn’t known for humorous books, so this title is a special joy.”

Before she became a platform speaker, Liz Curtis Higgs spent ten years as a successful radio personality, moving town to town, up and down the dial. In Mixed Signals, Liz draws on that memorable decade to create WPER, an oldies station in Abingdon , Virginia . The Barter Theater was included with thanks to her experience with amateur drama productions, and the ten hot-air balloon ascents she weathered while a broadcaster were also put to use. Her heroine, Belle, marries a radio station engineer…just as Liz did nearly twenty years ago. But there the parallels end in this winsome tale with two happy endings.

In her bestselling series of Bad Girls of the Bible books, workbooks, and videos, Liz Curtis Higgs breathes new life into ancient tales about the most infamous—and intriguing—women in scriptural history, from Jezebel to Mary Magdalene.   She is the author of more than 30 books, with more than 4.6 million copies in print. Her popular nonfiction books include Bad Girls of the Bible, Really Bad Girls of the Bible, Unveiling Mary Magdalene, Slightly Bad Girls of the Bible, Rise and Shine, and Embrace Grace. She’s also the author of the award-winning novels Here Burns My Candle and Mine Is the Night.   Her children’s Parable series received a 1998 ECPA Gold Medallion for Excellence, her nonfiction book Embrace Grace won a 2007 Retailers Choice Award, and her novel Whence Came a Prince received a 2006 Christy Award for Best Historical Novel. Here Burns My Candle was named 2010 Best Inspirational Romance by Romantic Times Book Reviews, and her 2011 novel, Mine Is the Night, was a New York Times bestseller.  On the personal side, Liz is married to Bill Higgs, PhD, who serves as director of operations for her speaking and writing office. Liz and Bill enjoy their old Kentucky home, a nineteenth-century farmhouse in Louisville, and are the proud parents of two college grads, Matthew and Lillian. Visit Liz’s website, LizCurtisHiggs.com.