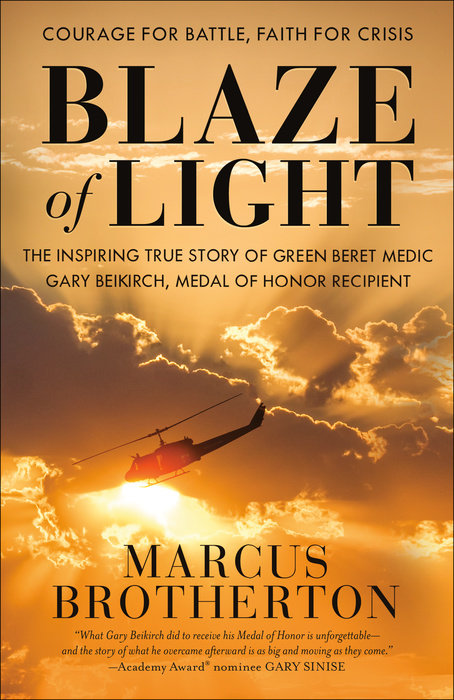 About Blaze of Light

After dawn the siege began. It was April 1, 1970, and Army Green Beret medic Gary Beikirch knew the odds were stacked against their survival. Some 10,000 enemy soldiers sought to obliterate the twelve American Special Forces troops and 400 indigenous fighters who stood fast to defend 2,300 women and children inside the village of Dak Seang. For his valor and selflessness during the ruthless siege, Beikirch would be awarded a Medal of Honor, the nation’s highest and most prestigious military decoration.

But Gary returned home wounded in body, mind, and soul. To find himself again, Gary retreated to a cave in the mountains of New England, where a redemptive encounter with God allowed Gary to find peace.

New York Times best-selling author Marcus Brotherton chronicles the incredible true story of a person who changed from lost to found. Gripping and unforgettable, and written with a rich and vivid narrative voice, Blaze of Light will inspire you to answer hurt with ingenuity, to reach for faith, and to find clarity and peace within any season of storm.

“The Medal of Honor Society is comprised of a highly elite group of American heroes. What Gary Beikirch did to receive his medal is unforgettable—and the story of what he overcame afterward is as big and moving as they come.”—Gary Sinise, Oscar-nominated actor

“From the windblast of landing choppers to the sensory assault of close-quarters battle, Blaze of Light put me right in the middle of the steaming jungles of Vietnam. Gary Beikirch was grievously wounded and facing a ruthless enemy, and his selfless choices made him the rarest of war heroes—one whose valor is measured not in lives taken but in lives saved.”—Lynn Vincent, New York Times bestselling author of Indianapolis

“You will be blessed by this story of amazing courage and selflessness. What happened on April 1, 1970, at Camp Dak Seang in the Kontum Province of South Vietnam forever changed the life of Gary Beikirch. He is a true American hero—a man of humility, faith, and servant leadership. This story is so powerful it could change your life.”—Colonel Jim Coy (Ret.), 3rd SFG, Persian Gulf War

“Gary Beikirch’s lifelong trek has been an especially arduous and inspiring journey—a broken home; the war-ravaged jungles of southeast Asia; a desperate post-battle, edge-of-death encounter with God in a Pleiku hospital; and the lonely dark tunnel of PTSD—culminating in a mountainside cave where he finally found peace on every front. This hard-core warrior experienced tenderness and hope through the gracious pursuit of the Savior. Read Gary’s story, weep tears of joy, and know that his life and this book are for Christ’s honor!”—Stu Weber, pastor and author of Tender Warrior

“Those who have experienced battle say time expands. Seconds feel like minutes, and minutes and hours stretch into virtual time warps. Marcus Brotherton successfully illustrates such perception of time in his telling of Gary Beikirch’s harrowing story. Marcus propelled me into the darkness of impending doom with speed and precision while casting light on the humanity and bravery of the characters who inhabit the pages I blew through. This book left me thoroughly inspired and honored to have ‘met’ yet another hero who earned the Medal of Honor.”—Eric Blehm, New York Times bestselling author of Fearless, Legend, and The Only Thing Worth Dying For

“I was on the Nixon White House staff while Gary Beikirch was serving in Vietnam’s jungles. As the White House looked at the mega-issues of the war, we too easily lost sight of the incredible micro-moments of heroism displayed by Gary and others, which are so skillfully described by Marcus Brotherton. Marcus shows not only the intensity of the war in the compound where Gary fought but also the pathos in the soul of the warrior. This book sheds needed light in an age when many are trapped in the darkness of PTSD.”—Wallace Henley, former White House and congressional aide and coauthor of God and Churchill, with Sir Winston Churchill’s great-grandson Jonathan Sandys

Marcus Brotherton is a journalist and professional writer, known internationally for his literary collaborations with high-profile public figures, humanitarians, inspirational leaders, and military personnel. He is the author of the national bestsellers A Company of Heroes, We Who Are Alive and Remain, Shifty's War, and the coauthor of Call of Duty with Lieutenant Lynn "Buck" Compton.