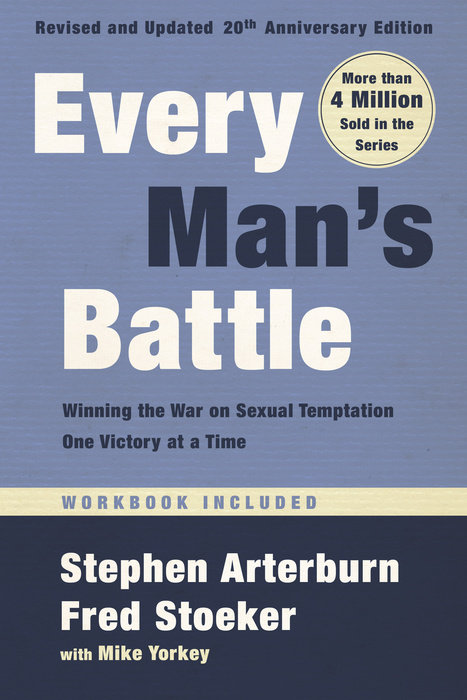 Winning the War on Sexual Temptation One Victory at a Time

About Every Man's Battle, Revised and Updated 20th Anniversary Edition

The groundbreaking guide to fighting sexual temptation, with more than 4 million copies sold in the series—now revised and updated to help men navigate the realities of technology and other contemporary challenges

“Every male should read this book. As the battle for our minds intensifies, the need for direction increases.”—Max Lucado, pastor and bestselling author

We live in a world awash with sensual images 24/7. The exponential growth of pornography and internet infidelity has men locked in a battle of spiritual warfare against these temptations, often drowning in addiction, defeat, and shame.

But you can be victorious in the battle for sexual integrity. Every Man’s Battle reveals a detailed strategy that has helped millions of men win the war against temptation. This revised and updated edition of the bestselling classic offers:

Every Man’s Battle offers a practical, biblical plan to help you experience victory and wholeness, as well as a comprehensive workbook for group discussion or personal reflection.

“Every male should read this book. As the battle for our minds intensifies, the need for direction increases. This book offers timely and timeless counsel.”—Max Lucado, pastor and bestselling author

“Sexual temptation is more prevalent than ever before, hounding men in every moment of every day, through our phones, movies, TV, the internet, and more. Stephen Arterburn and Fred Stoeker recognized the growing need to shift the conversation, and they put forth a resource to help men overcome their struggles and achieve victory. Countless lives and marriages have been transformed already by the principles in Every Man’s Battle, and this thoroughly updated guide to living with integrity will propel that impact even farther.”—Josh D. McDowell, author and speaker

“There is no more common enemy of true manhood than the diversion or the perversion of our sexual capacities. I welcome every contribution to the arsenal of resistance.”—Jack W. Hayford, LittD, former pastor of the Church on the Way and founder and chancellor of the King’s Seminary

“This book will revolutionize the marriage of every man who reads it. Why? Because every man battles sexual temptations, and every marriage grows stronger when these temptations are defeated. The vulnerable, honest, and insightful pages of this book reveal what every man must know.”—Drs. Les and Leslie Parrott, authors of Saving Your Marriage Before It Starts

“This timely resource presents clear, practical principles for sexual purity. Arterburn and Stoeker call for courage, commitment, and self-discipline as they lead men into a more successful relationship with God, family, and spouse. This book is truly for every man.”—Dr. John C. Maxwell, founder of the INJOY Group

“God has used Steve Arterburn countless times to impact my heart and life; I am thankful for him and his investment in Every Man’s Battle. I am also grateful for Fred Stoeker. Fred pours himself into this book with honesty, vulnerability, and a practical strategy to fight the good fight. He offers biblical truth and hope to anyone with ears to hear how to battle the war of sexual temptation. Read with an open heart, Every Man’s Battle may save your marriage and your witness.”—Dr. Gary Rosberg, president of America’s Family Coaches

“Having grown up in a machismo world and getting caught up in gangs before I turned to the Lord in prison, I definitely needed to read Every Man’s Battle when it came out twenty years ago—and I’m glad I did.”—Casey Diaz, author of The Shot Caller

Read the first few chapters of Every Man's Battle 20th Anniversary Edition. The groundbreaking guide to winning the battle with sexual temptation--now revised and updated to help men navigate the realities of technology and other contemporary challenges. From movies and television to print media and the Internet, men are continually bombarded with sensual images and content. It is impossible to avoid temptation, but this book offers a clear and tested strategy for victory. Millions have found Every Man's Battle an invaluable guide to overcoming the struggle and remaining strong in the face of temptation. With extensive updates, including the latest data on the intersection between brain science and sexuality, this bestseller shares the stories of dozens who have escaped the trap of sexual immorality and presents a practical, detailed plan for living with sexual integrity and a godly view of women. A comprehensive workbook makes this an ideal resource for small groups as well as personal use.
Request a Review Copy Request an Interview