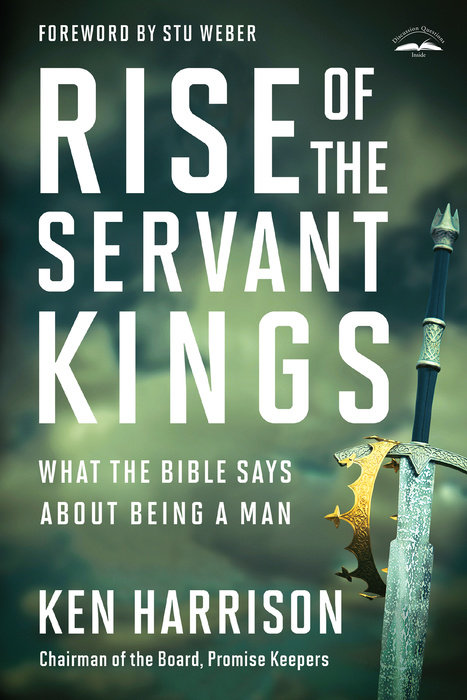 Rise of the Servant Kings

What the Bible Says About Being a Man

About Rise of the Servant Kings

The blueprint for becoming the man you were made to be—in marriage, family, work, friendships, with God in all of life.

“If you want a no-nonsense guide to getting manhood right, this is it.”—Evander Holyfield, four-time world heavyweight champion

Guys often approach life like it’s a pickup football game. They make up the rules as they go. They are sloppy rather than disciplined. Many lose interest and simply watch from the sidelines. Yet a man who knows who he was made to be and what he’s pursuing is a powerful force indeed.

In Rise of the Servant Kings, Ken Harrison, the chairman of Promise Keepers and a former Los Angeles police officer, gives men the keys to success and gets them into the battle. He explains what we’re fighting for and the path that will lead to victory by reinforcing the importance of holiness, humility, courage, generosity, masculinity, marriage, parenting, prayer, and more. Through scriptures, stories, and an energizing discussion guide, Harrison helps men remember what matters, defeat the Enemy, and pursue their God-given goals with intensity and passion.

God’s plan for you as a man is bigger than you’ve dared to imagine. Stop settling for simply getting by and prepare to rise up as a servant king in every area of life.

“I have passed the Promise Keepers baton to Ken Harrison with exceeding joy because Ken is a man of the Word and a man of prayer. Never has there been a greater need for men of the Word and prayer because men lead based on who they are. Additionally, Ken has a genuine love for brothers of color and is committed to ensure they are reached, included, and fully involved as Promise Keepers builds an army of godly men. Read this book; it was written by a man of integrity.”—Bill McCartney, founder of Promise Keepers and former head football coach at the University of Colorado

“No one will ever accuse Ken Harrison, a gritty ex-policeman who now heads Promise Keepers, of pulling any punches in describing the role of a servant king. His message is clear, direct, and on target as he challenges men to accept their responsibility as Christ followers in all arenas of life. Men of all ages will be encouraged by this timely reminder of both the cost and opportunity of authentic manhood.”—Mark Batterson, New York Times best-selling author of The Circle Maker and lead pastor of National Community Church

“In Rise of the Servant Kings, Ken Harrison explains clearly what the core qualities of a man of God should be. Since Ken is an ex–police officer, he is not afraid to get right to the nitty-gritty in describing how a man can apply the Bible’s principles for authentic masculinity in every area of life—from personal integrity to marriage to fatherhood to serving his fellow man. If you want a no-nonsense guide to getting manhood right, this is it.”—Evander Holyfield, four-time world heavyweight champion

“Some authors write with ink and some with water. Harrison writes with blood and fire, and his soul-stirring call for men to rise to the challenge of the hour is bold, timely, and heartwarming. If Christian men respond as the promise keepers described here, the world will be a different and better place.”—Os Guinness, author of The Call: Finding and Fulfilling God’s Purpose for Your Life

“Because I’m a woman, I don’t usually read books about being a man, but my husband was reading Ken’s book and was so enthusiastic that I wanted to know what set this book apart. Ken’s stories captivated me. His honesty inspired me. The book pulses with masculinity, yet God spoke to me, a woman! I’m buying Rise of the Servant Kings for every man in my life!”—Linda Dillow, author of Intimate Issues, Calm My Anxious Heart, and other books

“Masculinity, as God designed it, isn’t toxic. Rather, it’s good, life giving, courageous, and sacrificial. There were times while reading this book when I felt as if Ken were in my face! It was uncomfortable, but what he says is spot-on. I know Ken loves Christ, cares about the right things, and is passionate about seeing God’s kingdom advance. The truth he speaks is truth men need to hear.”
—John Stonestreet, president of the Colson Center and coauthor of A Practical Guide to Culture

“Ken has captured the biblical mandate of manhood. In a world of putting self first, he encourages men to be servant leaders both to their fellow man and to their God.”—Lt. Gen. (Ret.) William G. Boykin, US Army

“Scripture teaches and history affirms that our greatest kings and leaders have strong and loving hearts that beat to serve God, their families, and humanity. Ken writes and leads by example.”—Alveda King, evangelist, author, and activist at www.alvedaking.com

“You may have heard the statement that ‘being male is a matter of birth, but being a man is a matter of choice.’ Ken Harrison challenges us to the next level, that being a man of God means choosing to live proactively, courageously, and humbly. Masterfully blending deep theological insight with fascinating experiences as part of the LAPD, Ken addresses with sledgehammer force the key issues men struggle with. This book will arrest your heart to choose living out your true design as a servant king!”—Alan Platt, leader of Doxa Deo and City Changers Global

“Ken Harrison is the kind of person he writes about. He’s a man of character and conviction, and much of his book calls us to a similar path. I’m thankful that Rise of the Servant Kings will encourage men to be who God has called them to be.”—Ed Stetzer, executive director of the Billy Graham Center and dean of the School of Mission, Ministry, and Leadership at Wheaton College

“There are many voices speaking to us of manhood today. Ken Harrison’s is unique among them. It sounds forth from his gritty years as an LA cop, his inspiring business experience, and his hard-won victories as a leader of men. He is streetwise and biblical, humorous and learned. He issues a call to righteous manhood that we need to hear.”—Stephen Mansfield, New York Times best-selling author

“Little boys don’t want to grow up to be polite citizens who keep their lawn manicured. They want to be heroes and even superheroes who right wrongs, deliver the oppressed, and save the world. In Rise of the Servant Kings, Ken has done grown-up boys a favor by providing them both a reminder and a road map to experience the true greatness their Father King has planned for them.”—Todd Wagner, author of Come and See and founding pastor of Watermark Community Church

KEN HARRISON serves as the Chief Executive Officer of WaterStone, an organization that releases resources to support Christian humanitarian efforts worldwide. Currently WaterStone oversees donations of millions of dollars per month and manages a fund of $400+ million. He started his career as a Los Angeles police officer in the infamous 77th Division of South-Central Los Angeles, better known as Watts or Compton. There he received numerous commendations and awards. After leaving the LAPD in the 1990s, Ken went into business and built a small local company into one of the largest of its kind in the United States. He has served on multiple boards, and recently stepped into the role of chairman of the board of Promise Keepers, a well-known organization ministering to Christian men. Harrison is also the author of Victims & Victors. He has been married to his wife, Elliette, for 27 years and they have three children.