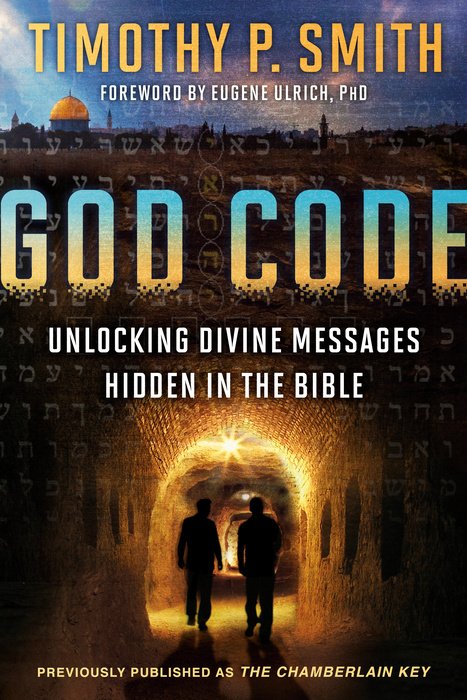 The book that inspired the major History Channel special God Code shows there is more to the Bible than meets the eye—messages from God hidden for ages, now revealed by modern computer technology.

In God Code, antiquities expert Timothy P. Smith reveals his decades-long quest to understand the complex messages he discovered in an ancient Hebrew manuscript of the Bible. This painstaking search involves adventure and mystery, but instead of consulting ancient maps to find buried treasure, Smith relied on the data calculation power of modern technology. His quest shows how Scripture is more amazing than we ever dreamed—and that it may even reveal the future of generations living today.

God Code reveals:
• An encrypted code in Genesis, in the oldest known Hebrew text of the Old Testament, that predicted the birth and resurrection of Jesus.
• Scientific evidence that this encrypted code was authored by the divine hand of God.
• Signs that there are more encrypted codes in this same Hebrew text that will lead to additional messages from God to humanity.
• Hidden clues that may lead to the location of long-missing sacred artifacts, such as the Ark of the Covenant.
• Insights on why Smith was chosen to uncover this encrypted code.
• A dire warning that God wants us to hear—and heed.

In the companion History Channel series, the author travels across continents in search of artifacts missing since Bible times—clues to their location revealed in God Code.

Previously published as The Chamberlain Key

“However one wishes to interpret the meaning and significance of the text, they may rest assured that the text on which Timothy Smith bases his interpretation has almost certainly been there for a very long time, since before the birth of Christ.”—Eugene Ulrich, PhD, department of theology, University of Notre Dame; chief editor, Biblical Dead Sea Scrolls

TIMOTHY P. SMITH is a noted appraiser and conservator of artifacts and antiquities. He has discovered and recovered many priceless historical items, none of which has amazed and excited him as much as “the chamberlain key.” Timothy and his wife reside in Virginia.

Read the first chapter of God Code. The book that inspired the major History Channel series, “God Code," shows there is more to the Bible than meets the eye--messages from God hidden for ages, now revealed by modern computer technology. In God Code Timothy Smith reveals his quest over decades to understand the complex messages he discovered in an ancient Hebrew manuscript of the Bible--some of them applying specifically to him! His painstaking search has involved adventure and mystery, but instead of consulting ancient maps to find buried treasure, this hunt has relied on the data calculation power of modern technology. God Code shows how Scripture is more amazing than we ever dreamed...a unique, layered book that may even reveal the future of generations living today. In the companion History Channel series, the author travels across continents in search of artifacts missing since Bible times--clues to their location revealed in God Code.
Request a Review Copy Request an Interview

For generations, the Hebrew Bible has been revered as the holy and sacred Word of God. As the scriptural foundation of both the Jewish and Christian faiths, it is the most influential text in Western civilization. But is there more to the Bible than meets the eye? Does technology allow for new messages from God to be discerned today?

Timothy P. Smith, a Virginia-based appraiser and conservator of artifacts and antiquities, believes he has discovered a code encrypted in the ancient Hebrew text that unequivocally provides proof of the Bible’s divine authorship. In what reads like an adventure novel, Smith shares his startling findings in God Code: Unlocking Divine Messages Hidden in the Bible (March 6, 2018, WaterBrook), previously published in hardcover as The Chamberlain Key.

Smith’s globetrotting journey is the basis of a new two-hour special, also titled “God Code,” that will premiere Sunday, April 8 at 9 PM ET/PT on HISTORY. “This is not a scripted program, but a real rough and tumble quest for the world's greatest treasure,” says Smith.

“I want people to look at the Bible with a new found lens,” says Smith. “The Bible is a treasure that has been cherished and protected by people around the world for thousands of years and now this text is revealing new messages for our generation.”

In God Code, readers will join Smith on a page-turning trek that takes them from Virginia to the remote Rockies of British Columbia to Southern Spain and the site of the Rocio Madonna. Part code-cracker and part historical sleuth, Smith tells his highly personal and up-until-recently private story of faith, adventure and discovery that not only holds personal but potentially historical and religious implications.

God Code presents empirical evidence that the oldest Hebrew biblical texts are vastly more multifaceted and extraordinary than previously understood. When researching a mystery about his family heritage, Smith was drawn to Genesis 30:20-24. There, using an equidistant letter skip decryption method, he discovered not only his own name but also biographical information of other family members. The statistical odds of this are beyond mathematical calculation, and it was just the tip of the iceberg.

Smith examined further this short passage in Genesis and found detailed information on Jesus, including his virgin birth, his crucifixion and resurrection—in a text believed to have been written between 1300-900 BC, centuries before Christ’s birth. Using this process, which he refers to as The Chamberlain Key because through it he has been able (much like the chamberlains of old) to unlock doors that have been locked for centuries, Smith has come across such findings as:
·       Evidence that the words and letters of the Hebrew Bible are not only carefully preserved but precisely arranged by God
·       Clues to the location of the contents of the Ark of the Covenant
·       References to revered religious images, such as the Rocio Madonna
·       Warnings of spreading anti-Semitism, hatred and violence
Smith has been assisted in his research by a cadre of eminent scientists and scholars from around the world who have shared their expertise to help unravel the phenomenon of his discoveries in the most ancient Biblical texts.

In the book’s foreword, Dr. Eugene Ulrich, chief editor of the Biblical Dead Sea Scrolls and professor of Hebrew Scripture and Theology at University of Notre Dame, writes, “However one wishes to interpret the meaning and significance of the text, they may rest assured that the text on which Timothy Smith based his interpretations has almost certainly been there for a very long time, since before the birth of Christ.”

“My hope in publishing this book is not to provoke unwarranted fear or, certainly, to imply I have all the answers,” says Smith, “but instead to invite investigation and consideration—to encourage others to take a closer look not only at the ancient Hebrew Scriptures…but also New Testament writings that appear to be interwoven with the Hebrew text in ways barely imagined before now.”

ABOUT THE AUTHOR:  Timothy P. Smith is a noted appraiser and conservator of artifacts and antiquities. He is president of Timothy Smith & Sons, which sells antiques and fine arts as well as offers appraisal and restoration services. Smith is the fourth generation of one of North America's most noted conservation and preservation families. Family projects include the construction of the Jefferson Memorial, The National Gallery of Art and The Carter Rock Naval Test Center. Among Smith’s private clients are a former president, former United States senators and military leaders.

Smith is a court certified appraiser and has been utilized as an expert witness, appraiser and art and antiquities recovery specialist for more than 30 years. God Code (previously titled The Chamberlain Key), is his first book. He is currently in working on a production with Jupiter Entertainment and HISTORY for a documentary television special. He lives in Eastern Virginia with his wife.
Timothy Smith is