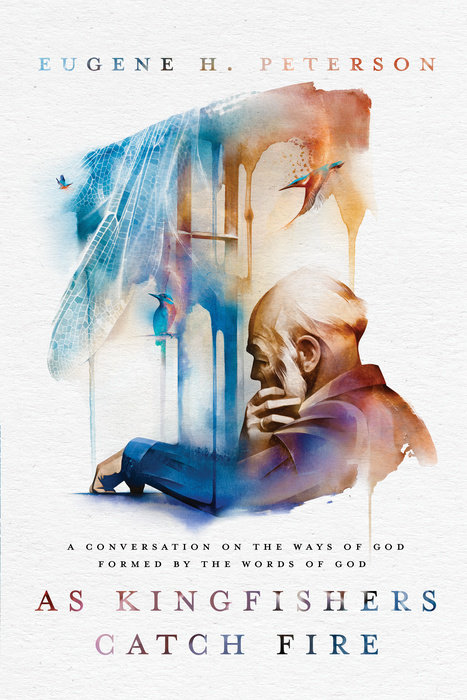 About As Kingfishers Catch Fire

Living Out the Word Made Flesh

“Sixty years ago I found myself distracted,” Eugene Peterson wrote. “A chasm had developed between the way I was preaching from the pulpit and my deepest convictions on what it meant to be a pastor.”

And so began Peterson’s journey to live and teach a life of congruence—congruence between preaching and living, between what we do and the way we do it, between what is written in Scripture and how we live out that truth.

Nothing captures the biblical foundation for this journey better than Peterson’s teachings over his twenty-nine years as a pastor. As Kingfishers Catch Fire offers a collection of these teachings to anyone longing for a richer, truer spirituality.

Peterson’s strikingly beautiful prose and deeply grounded insights usher us into a new understanding of how to live out the good news of the Word made flesh.

This is one man’s compelling quest to discover not only how to be a pastor but how to be a human being.

“As Kingfishers Catch Fire covers it all, the A to Z of Christian spirituality. It is filled with the kind of wisdom that can only come from long obedience in the same direction! It’s more than a book; it’s a gift. Thank you, Eugene!”
—Mark Batterson, New York Times best-selling author of The Circle Maker and lead pastor of National Community Church, Washington, DC

“There is no one who has done more to shape my ‘pastoral imagination’ than Eugene Peterson. Now, through this extraordinary collection, we see how words become pastoral work. An exegete and a poet, Peterson opens up to us not only the text but its world, welcoming us to walk with Moses, David, Isaiah, Solomon, Peter, Paul, and John. And as we do, we find ourselves keeping company with Jesus. Read it devotionally; read it as a study in sacred storytelling; read it to come alive along the Jesus Way.”
—Glenn Packiam, associate senior pastor, New Life Church, Colorado Springs

“Eugene Peterson is brilliant and the gift he has given the church is huge. This is a man who has the mind of a scholar paired with the heart of a grace-filled pastor. The main thing is that he loves God’s word and that is so apparent in every word that he writes.”
—Liz Curtis Higgs, best-selling author of "The Women of Easter" and Bad Girls of the Bible series

“I can hear Eugene Peterson’s warm and gravelly voice in each well-crafted chapter of As Kingfishers Catch Fire. I wish I could have been in a pew listening to the Word spoken for a particular time, place, and people, but reading this collection is the next best thing. Peterson’s attention to biblical texts, theological concerns, and earthy applications for real people are the same threads we find in his many books. Reading just the introduction to each section is time well spent, but I promise you won’t stop there.”
—Dan Baumgartner, senior pastor, First Presbyterian Church of Hollywood

"As Kingfishers Catch Fire is a collection of 49 sermons Peterson first preached at Christ Our King Presbyterian Church during nearly 30 years of ministry there (1962–1991). The sermons are divided into seven groups, each grouped together with the formula, “Preaching in the Company of _____,” where the fill-in-the-blank is Moses (the Law), David (Psalms), Isaiah (the Prophets), Solomon (Wisdom literature), Peter (the Gospels), Paul (the Epistles), and John (the Johannine literature). Throughout, Peterson strives to "enter into the biblical company of prototypical preachers and work out of the traditions they had developed under the guidance of the Holy Spirit." The result is a master class in what Scripture says about the pastoral care of souls. Peterson eschews the notions that spirituality can be pursued apart from everyday life or that it can be sought without the company of others. Instead, as he writes in a characteristic passage:

"It is somewhat common among people who get interested in religion or God to get proportionately disinterested in their jobs and families, their communities and their colleagues. The more of God, the less of the human. But that is not the way God intends it. Wisdom [literature] counters this tendency by giving witness to the precious nature of human experience in all its forms, whether or not it feels or appears ‘spiritual’” (emphasis in original). This isn’t to deny that spiritual disciplines such as prayer, Scripture reading, and corporate worship are vital. But, Peterson is saying, unless those disciplines make us better workers, family members, neighbors and friends, we haven’t yet achieved the congruence of life to which Scripture bears witness: persons who act in God’s eye what in God’s eye we are, that is, “Christ who lives in [us]” (Gal. 2:20).

This is not a book I would recommend to some pastors. For example, if you’re looking for a book that gives you a fool-proof three-step process to ______ (whatever it is that you’re trying to do), skip this one. Or if you’re looking on Saturday night for a three-point sermon you can preach the next morning, don’t read this. Peterson’s sermons are ongoing conversations, not plug-and-play outlines. However, if you’re tossed about by the winds of the times or you’re tired of slapping Bible verses on business principles or if your ministry lacks congruence between the means of discipleship and the ends of Christlikeness, please read this book. It will feed your soul, and through you, the souls of your congregation. Then read it again."
—George O. Wood, Influence Magazine

"Unlike many sermons that barely make it out of the pulpit, Peterson’s soar out and draw in throughout this fantastic book. His words, written for speaking, are sure, intimate, and trustworthy. Peterson (The Message) admits that preaching is a “corporate act” that requires a congregation in common worship. For 29 years, he preached at the church he founded, Christ Our King Presbyterian Church in Bel Air, Md., and this anthology of sermons welcomes readers to join that company. He intends these 49 sermons, undated but for one, to be used in conjunction with communion. Following his gracefully instructive introductions to each chapter, Peterson preaches “in the company” of Moses, David, Isaiah, Solomon, Peter, Paul, and John of Patmos. What he says about Paul applies to him, too: he’s “totally at ease in this richly expansive narrative of God’s Word.” Peterson mixes storytelling with exegeses, the rare sermon (on Psalm 110) with the annual, history with geography, language lessons with a skosh of mathematics, and wisdom with wit—all in tuneful, God-fed language.
—Publishers Weekly

"For nearly three decades, members of Christ Our King Presbyterian Church in Bel Air, Md., enjoyed a rare privilege. Week by week, they listened to wordsmith Eugene Peterson preach. Over his 29 years as the congregation’s founding pastor, those worshippers undoubtedly heard some of the most skillfully crafted sermons delivered in the past generation. In the process, they learned what God had to say to them as a specific group of Christ-followers in their unique context. Peterson has described the sermons as a collaborative effort—an ongoing conversation between the pastor and his people, as they collectively listened for a word from God.

Those of us who did not have the opportunity to hear the sermons delivered now have access to the next-best thing. As Kingfishers Catch Fire collects 49 sermons—seven each grouped under the names of Moses, David, Isaiah, Solomon, Peter, Paul and John. By Peterson’s reckoning, each biblical personality offers a distinctive approach, and sermons preached in their company together help to constitute “the whole counsel of God.” The sermons span his three decades at the Maryland congregation, and glimmers of the congregation’s personality appear.
After all, Peterson consistently refused to accept God’s self-revelation simply as a set of high-flown propositions. Rather, he insisted on the Mystery of Incarnation—God taking on flesh and blood and moving into the neighborhood. And that means the church, the Body of Christ, likewise must live out its faith in the common day-to-day routines of the workplace, the home and the streets.

So, the sermons seem simultaneously directed to a specific congregation in Bel Air and universally applicable to all God’s people, wherever they live. And they do it with poetic sensitivity. Peterson writes: “Poetry is not the language of objective explanation but the language of imagination. It makes an image of reality in such a way as to invite our participation in it.”

As any reader of The Message translation of Scripture knows, Peterson has a love affair with well-chosen words. Few use language with the grace and skill he exhibits. At the same time, the sermons collected here make it clear Peterson’s preaching was not mere performance art. Instead, they grew out of a pastoral sensitivity to the people in the pews. The book takes its title from a poem by Gerard Manley Hopkins, which Peterson reads as a series of metaphors about congruence. The poem describes the rightness and wholeness found when what one is and what one does are seamless. This collection of sermons by pastor-poet Peterson has that sense of congruence."
—The Baptist Standard

Eugene H. Peterson, translator of The Message Bible, authored more than thirty books, including Every Step an Arrival, As Kingfishers Catch Fire, and the spiritual classics Run with the Horses and A Long Obedience in the Same Direction. He earned a degree in philosophy from Seattle Pacific University, a graduate degree in theology from New York Theological Seminary, and a master’s degree in Semitic languages from John Hopkins University. He also received several honorary doctoral degrees. He was founding pastor of Christ Our King Presbyterian Church in Bel Air, Maryland, where he and his wife, Jan, served for twenty-nine years. Peterson held the title of professor emeritus of spiritual theology at Regent College, British Columbia from 1998 until his death in 2018.

Mike Foster on AS KINGFISHERS CATCH FIRE by Eugene Peterson

Adam Weber on AS KINGFISHERS CATCH FIRE by Eugene Peterson