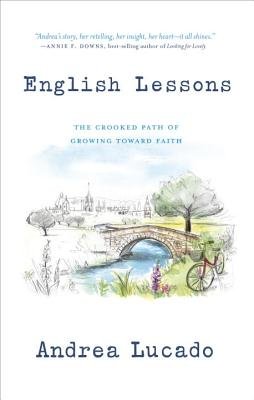 The Crooked Path of Growing Toward Faith

The Questions Would Teach Her More Than the Answers

It wasn’t long after arriving in Oxford for graduate school that twenty-two-year-old Andrea Lucado – preacher’s daughter from Texas - faced not only culture shock, a severe lack of coffee, but also some unexpected hard questions: Who am I? Who is God? Why do I believe what I believe?

“So many nights in Oxford, I felt like the details of my faiths were getting fuzzier. Nights turned restless with the questions and the thoughts. I questioned God’s existence and the doubt, it was getting into my bones….”

In this engaging memoir, Andrea speaks to all of us who wrestle with faith, doubt, and spiritual identity. Join Andrea as she navigates the Thames River, the Oxford Atheist Society, romance in ancient pubs—and a new perspective on who God is. As Andrea learned, sometimes it takes letting go of old ideas to discover lasting truth.

“Luminous patience and insight lights these uncommonly thoughtful pages. Andrea Lucado is a winsome, wise, and unwaveringly honest companion for the wonderer and wanderer, and the lines on these pages offer a tangible lifeline to every God-wrestler. These are pages that are hard to put down, that you will want to return to and reread. Andrea not only offers a genuine way to love the questions themselves, she offers an authentic way to love the Answer Himself.”
—Ann Voskamp, author of the New York Times bestsellers The Broken Way and One Thousand Gifts

“This book brought me right back to a younger self—a bookish pastor’s daughter living abroad, making sense of her faith, of the world and her place in it. Andrea is a lovely writer, and this story will make you ache for the feelings and memories and experiences of your early twenties—both the wonderful ones and the challenging ones. And it will make you want to go to Oxford, of course.”
—Shauna Niequist, New York Times best-selling author of Present Over Perfect and Bread & Wine

“To have a strong faith we can stand on, we all need to wrestle well with hard questions and come face-to-face with our gut-honest feelings. Andrea does this in such a tenderly beautiful way that will leave the deep parts of your heart feeling comforted and understood.”
—Lysa TerKeurst, New York Times best-selling author and president of Proverbs 31 Ministries

“English Lessons is positively paradoxical—both mature and youthful, entertaining and challenging, full of light and full of depth. Written by a pastor’s daughter, it is the perfect book for those trying to own a faith handed to them by someone else. Whether you’re a spiritual seeker or a hardened skeptic, this book will both honor your doubts and open your heart to grace. A wonderful paradox, indeed!”
—Jonathan Merritt, contributing writer for The Atlantic and author of Jesus Is Better Than You Imagined

“In English Lessons we discover an honest voice exploring life and love, finding that it’s okay and even common to not know where the journey will take you. Andrea Lucado’s memoir is a story of love and friendship, saying goodbyes, and seeing yourself in a mirror to find out more of who you really are, perhaps for the first time. Her year in Oxford was a wide-open space for a life of grace.”
—Scot McKnight, Julius R. Mantey Chair of New Testament, Northern Seminary

“English Lessons is one of those beautiful books that you can just fall into. Andrea’s story, her retelling, her insight, her heart—it all shines. I love this book, I learned from it, and I cannot wait to read it again.”
—Annie F. Downs, best-selling author of Looking for Lovely and Let’s All Be Brave

“In this vivid and vulnerable memoir, Andrea Lucado allows readers to experience both the charms and the challenges of living in a foreign place. Anyone who has had their faith stretched to a near-breaking point will feel themselves walking with Andrea next to the River Thames, staying up late talking theology with a new friend, and facing the discomforts of a chilly English winter. Andrea’s story gives readers permission to have faith like a child, questions like a teenager, and steady trust like an adult. If you want your own faith to grow and to grow up, this well-rendered story is for you.”
—Katelyn Beaty, editor at large, Christianity Today, and author of A Woman’s Place

Andrea Lucado is a freelance writer based in Austin, Texas. The daughter of best-selling author and pastor Max Lucado, she inherited an obsession with words and their arrangement. She has a masters degree in English literature from Oxford-Brookes University and contributes regularly to online and print publications such as Relevant magazine and She Reads Truth. When she is not conducting interviews or writing stories, you can find her laughing with friends at a coffee shop or running in the Texas hill country.

Could She Come to Love the Questions Themselves? The church wasn’t just a part of Andrea Lucado’s childhood. It was her childhood. It provided more than happy moments. It provided an invitation to know Jesus. When Andrea arrived in Oxford the year after she graduated from college, she expected to meet God there. What she didn’t expect was that God would be much bigger than she’d believed. In this engaging memoir, Andrea speaks to all of us who wrestle with doubt and identity. “So many nights in Oxford,” Andrea writes, “I felt like the details of my faith were getting fuzzier. Nights turned restless with questions. I questioned God’s existence, and the doubt was getting into my bones." In English Lessons, Andrea takes us through the roads of England and, more importantly, the paths of the soul. Here she explores the journey of a changing faith and an unchanging God—and why growing up starts with realizing just how small we are.
Request a Review Copy Request an Interview

Pastor’s Daughter, Andrea Lucado, Offers Insight for Millennials and Their Parents About Faith and Its Questions

COLORADO SPRINGS, Colo. –  What happens when you take a preacher’s daughter from Texas and drop her on the lawns of Oxford for a year? Andrea Lucado discovered that such a trip across the ocean leads to even deeper journeys of the soul.

In English Lessons: The Crooked Path of Growing Toward Faith (WaterBrook, May 2, 2017), Lucado describes with great honesty and humor what it was like to leave the sheltered church of her youth to live in England for a year after she graduated from college. Her time in Oxford included dates in ancient pubs, dark northern days and tea-infused conversations that built lasting friendships.

Lucado’s faith journey is striking for many reasons. Numerous reports speak to the fact that millennials are leaving the church in large numbers. More than one-third of millennials say they are “unaffiliated with any faith”[1] Seventy-four percent agree with the statement, “Whatever is right for your life or works best for you is the only truth you can know.”[2]  Just 56% of today’s youngest millennials call themselves Christians, even though about 8 in 10 of them grew up in Christian homes.[3] The church needs to understand why this is happening and how to engage in conversation about it.

Lucado discusses the questions of faith being asked by her generation and that she asked during those months in England:


• Who am I?
• What do I really believe?
• Would I still choose to be a Christian if I had not been raised in a Christian home?

English Lessons captures the wrestlings of today’s young adults who want an authentic, thoughtful faith and aren’t finding it through their local church. Lucado has the rare ability to speak to her generation about their doubts and disillusionment without sounding either cynical or naive. She writes,

Growing up, no matter when growing up happens, requires shedding layers. Especially when it comes to growing more mature in faith. In order to learn new things, you must first unlearn old things to make space for the new things…. You are giving away parts of your very self, things you always held to be true. But you have to. In order to become more of the person you are, in order to believe in the God who actually is, you must get rid of the old parts that no longer make sense, revealing the truth that lies underneath.

Through stories of restless nights, cathedral prayers and God’s unchanging presence in her life, Lucado helps readers let go of their assumptions in order to grasp something more lasting. As her engaging reflections suggest, Lucado’s time in Oxford melted away her “precious truths and how-it-should-be’s” to reveal a faith that could grow strong even in the questions.


ABOUT THE AUTHOR: Andrea Lucado is a freelance writer based in Austin, Texas. The daughter of bestselling author and pastor Max Lucado, Andrea inherited an obsession with words and their arrangement. She has a master’s degree in English literature from Oxford-Brookes University and contributes regularly to online and print publications such as Relevant magazine and SheReadsTruth.com. When she is not conducting interviews or writing stories, you can find her laughing with friends at a coffee shop or running in the Texas hill country.

1. You describe how you spent more of your childhood in a church than outside of it. What do you mean by that?

2. We often hear of people, particularly those in the millennial generation, who grew up in the church and then abandoned their faith as a young adult. Is that what this book is about?

3. English Lessons describes the year you spent in Oxford right after you graduated from college. Did you expect the environment to be challenging to your faith?

4. What was the biggest surprise for you about living in England?

5. What questions did you start asking during this time?

6. Did you gain from your Oxford experience what you thought you would?

7. Was there a particular moment in Oxford when you felt God’s presence with you?

8. When you arrived back in the United States, in what ways had your beliefs changed?

9. What would you say to someone who feels guilty for questioning God’s existence?

10. Your father, Max Lucado, is a well-known pastor and author. What advice did he have for you when you decided to pursue a writing career?

11. What guidance would you give to Christian parents whose children are questioning their faith?

12. You are part of a generation that can sometimes be cynical about the church. As someone who grew up in the church, do you find yourself more cynical or positive about that experience?