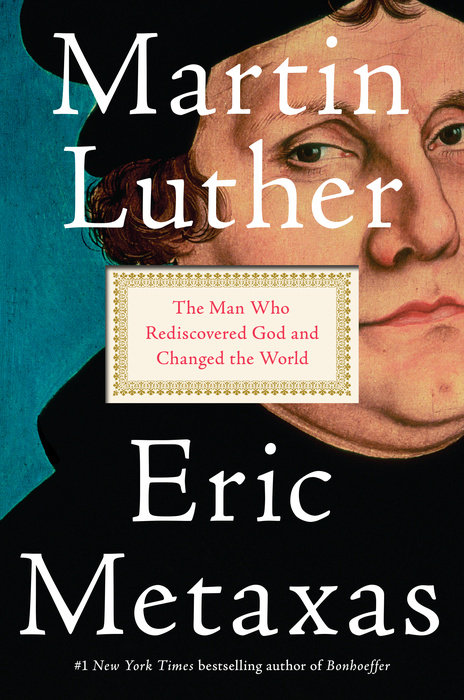 The Man Who Rediscovered God and Changed the World

“Metaxas is a scrupulous chronicler and has an eye for a good story. . . . full, instructive, and pacey.” —The Washington Post

From #1 New York Times bestselling author Eric Metaxas comes a brilliant and inspiring biography of the most influential man in modern history, Martin Luther, in time for the 500th anniversary of the Reformation

On All Hallow’s Eve in 1517, a young monk named Martin Luther posted a document he hoped would spark an academic debate, but that instead ignited a conflagration that would forever destroy the world he knew. Five hundred years after Luther’s now famous Ninety-five Theses appeared, Eric Metaxas, acclaimed biographer of the bestselling Bonhoeffer: Pastor, Martyr, Prophet, Spy and Amazing Grace: William Wilberforce and the Heroic Campaign to End Slavery, paints a startling portrait of the wild figure whose adamantine faith cracked the edifice of Western Christendom and dragged medieval Europe into the future. Written in riveting prose and impeccably researched, Martin Luther tells the searing tale of a humble man who, by bringing ugly truths to the highest seats of power, caused the explosion whose sound is still ringing in our ears. Luther’s monumental faith and courage gave birth to the ideals of liberty, equality, and individualism that today lie at the heart of all modern life.

“A meticulously researched and detailed account of Luther’s life and times . . . a very human portrait. . . . Metaxas is a scrupulous chronicler and has an eye for a good story. The result is full, instructive, and pacey.”
—The Washington Post

“Metaxas knows how to tell a story and how to develop characters, and this talent makes his narrative at once gripping and accessible . . . an excellent glimpse of the whole of Luther’s life.”
—The New York Times Book Review (Editors' Choice)

“Mr. Metaxas has a knack for capturing the heart and mind of his subjects . . . his conclusions about the 16th-century revolutionary are uniquely Metaxas, a deep and thoughtful writer with much to teach the world.”
—The Washington Times

“If you had to make a list of five people who shaped the modern West, Martin Luther would be on it. Yet almost everything you think you know about Luther is wrong, as Eric Metaxas shows in this brilliant biography. This is an amazing story, beautifully told. You’ll emerge wiser.”
—Tucker Carlson, host of Tucker Carlson Tonight

“When Martin Luther made it possible to read the Bible for yourself, he did more than anyone else to create the future. Read this book for yourself to understand the story we’re all still living through.”
—Peter Thiel, cofounder of PayPal, entrepreneur, and author of Zero to One

“A marvelous, brilliant book that is equal parts biography, theology, political philosophy, and cultural history. With a light and rapid touch that nonetheless is capable of conveying deep truths and insights, Metaxas deftly blends these many elements into a narrative that reads as compellingly as a novel. I imagine that Luther himself—not an easy man to please—would be deeply impressed by this master portraiture.”
—Mark Helprin, bestselling author of Winter’s Tale and A Soldier of the Great War

“Metaxas’s Martin Luther is a breathtaking achievement and a gripping read. Bold, fast-paced, and magisterial like its hero, yet always stylish and witty like its author, this account blows the cobwebs off long-settled expectations, and helps us to understand the man who shook the medieval world and helped to shape the modern world.”
—Os Guinness, author of Impossible People

“Eric Metaxas has blessed us with yet another indispensable biography. With his customary verve and elegance, profound reverence, and biting wit, Metaxas’s Martin Luther is an education in the meaning of man’s relation to God. It makes Luther’s life come alive and illuminates how deeply that life has affected our own.”
—Bret Lott, bestselling author of Jewel and nonfiction editor of Crazyhorse magazine

“As with his seminal work on Bonhoeffer, Eric Metaxas, in this extraordinary work on Martin Luther, reveals those nuances that made Luther the force that he was. As the details gather in the book, you soon feel the presence of the man himself.”
—Dr. Gerald L. Schroeder, lecturer and teacher at College of Jewish Studies Aish HaTorah’s Discovery Seminar

“This massive but eminently readable biography of Luther deserves no less an adjective than ‘formidable.’ Eric Metaxas is to religious biographers what Pixar is to cartoons.”
—Peter Kreeft, author of Catholics and Protestants: What Can We Learn from Each Other?

“If you wish to know why Martin Luther is remembered as one of the most consequential figures in history, and why Eric Metaxas has emerged as one of the most prominent storytellers of our generation, you’ll find the answers in this book. Eric’s skill as a writer and biographer are on full display here, even as he corrects the myths and secures the history of a monk who changed the world.”
—John Stonestreet, president of the Chuck Colson Center for Christian Worldview

“One of the most engaging, inspiring, and entertaining books on Luther I've ever read. Every page a joy.”
—J.D. Greear, pastor of The Summit Church in Raleigh-Durham, NC

“Metaxas is the best storyteller among the Luther biographers.”
—WORLD magazine

“Outstanding . . . full of clever turns of phrase and humor that makes the incredible story of Luther all the more accessible.”
—ChristianHeadlines.com

“A biography designed to peel back the myths and reveal Luther as the fascinating and influential man he was . . . A fast, easy read.”
—The Houston Chronicle

“Turns some centuries-long legends upside down.”
—The Blaze

“A masterful portrait of a seminal figure.”
—Booklist (starred review)

“A meaty autobiography of the Reformation leader. Metaxas brings his flair for epic biography that was on such impressive display in his 2010 book, Bonhoeffer . . . Metaxas offers something different and special.”
—Kirkus Reviews (starred review)

Eric Metaxas is the #1 New York Times bestselling author of Martin Luther, If You Can Keep It, Bonhoeffer, Amazing Grace, and Miracles. His books have been translated into more than twenty-five languages. His writing has appeared in The Wall Street Journal, The New York Times, and The New Yorker, and Metaxas has appeared as a cultural commentator on CNN, the Fox News Channel, and MSNBC. He is the host of The Eric Metaxas Show, a nationally syndicated daily radio show. Metaxas is also the founder and host of Socrates in the City, the acclaimed series of conversations on "life, God, and other small topics," featuring Malcolm Gladwell, Dick Cavett, and Rabbi Lord Jonathan Sacks, among many others. He is a senior fellow and lecturer at large at the King's College in New York City, where he lives with his wife and daughter.