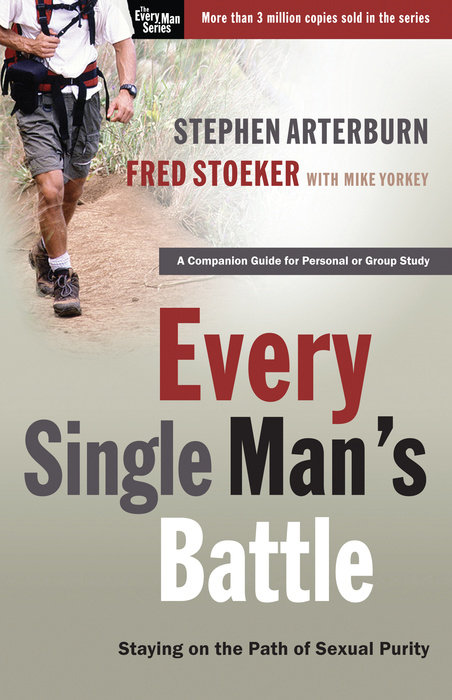 Staying on the Path of Sexual Purity

About Every Single Man's Battle

Powerful ammunition for your war against sexual temptation.

As a man, you’re bombarded by sexual images and battle inner urges. You want to do right—in fact, you want to meet God’s standard of avoiding any hint of sexual immorality. But accomplishing that goal is a challenge.

If you are a single man struggling to remain sexually pure, you are not alone—
there’s practical, hard-hitting help from the authors of the blockbuster Every Man Series. Every Single Man’s Battle guides you—or your men’s group—through an honest and clear exploration of God’s Word. You’ll undertake a personal journey into key scriptures, wrestle with questions for reflection and examination, and discover the practical tools and biblical strategies you need to live the pure life God calls you to—even while living in a sexually-soaked culture.

Make a frontal assault on the temptation every single man faces. This book provides all the resources you need.

“There is no more common enemy of true manhood than the diversion or the perversion of our sexual capacities. I welcome every contribution to the arsenal of resistance.”
—JACKW. HAYFORD, LITTD, founding pastor of the Church on theWay and chancellor of The King’s University

“This book will revolutionize the marriage of every man who reads it. Why? Because every man battles sexual temptations and every marriage grows stronger when these temptations are defeated. The vulnerable, honest, and insightful pages of this book reveal what every man must know.”
—DRS. LES AND LESLIE PARROTT, authors of Saving Your Marriage Before It Starts

“This timely resource presents clear practical principles for sexual purity. Arterburn and Stoeker call for courage, commitment, and self-discipline as they lead men into a more successful relationship with God, family, and spouse. This book is truly for every man.”
—DR. JOHN C. MAXWELL, founder of EQUIP

“God has used Steve Arterburn countless times to impact my heart and life; I am thankful for him and his investment in Every Man’s Battle. I am also grateful for Fred Stoeker. Fred pours himself into this book with honesty, vulnerability, and a practical strategy to fight the good fight. He offers biblical truth and hope to anyone with ears to hear how to battle the war of sexual temptation. Read with an open heart—Every Man’s Battle may save your marriage and your witness.”
—DR. GARY ROSBERG, president of America’s Family Coaches and coauthor of Guard Your Heart and The Five Love Needs of Men and Women

“Every Young Man’s Battle does the best job I have ever seen on the subject of sexual temptation. Once upon a time we lived in a world that didn’t talk about secrets, and that world has brought us to the mess we are in today. Young men must have an honest, blunt, and unashamedly Christian look at their sexuality. This book will save thousands of future marriages.”
—JIM BURNS, president of HomeWord

Read the first chapter of Every Single Man's Battle. As a single man, youre in a war against sexual temptation. But God has given you powerful ammunition. Youre bombarded by sexual images. Youre constantly battling inner urges. You want to do rightin fact, you want to meet Gods standard of avoiding any hint of sexual immorality. But accomplishing that goal is a challenge.  If you are a single man struggling to remain sexually pure, you are not alone. Now theres practical, hard-hitting help from the authors of the blockbuster Every Man series.
Request a Review Copy Request an Interview