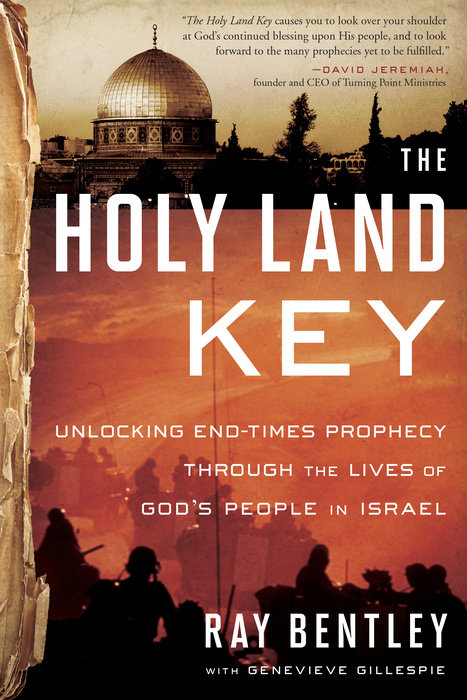 About The Holy Land Key

The study of prophecy inspires elaborate timelines and speculation about which world leader might rise to power in the last days. But meanwhile, it’s far too easy to miss the significant prophetic signs contained in stories of biblical characters, in God’s creation, and in the lives and actions of today’s Israelis and Palestinians.

The Holy Land Key opens our eyes to little-known aspects of prophecy, including:
·         God’s master plan revealed in the seven Feasts of the Lord
·         The ingathering of God’s people, and the ways Israelis are hearing from God today
·         Significant prophetic patterns discovered in the lunar cycle
·         Awe-inspiring testimonies to God’s glory spelled out in the night sky
·         Glimpses of God’s future kingdom revealed in the stories of well-known figures from Scripture

For decades, author and pastor Ray Bentley has partnered with God’s people in Israel, including Judea and Samaria, the area known as the West Bank. There, he witnesses the fulfillment of prophecy firsthand. This is your introduction to prophetic signs that God reveals in sometimes unexpected ways. He does not want us to miss the work he is doing to usher in the coming Kingdom.

Praise for The Holy Land Key

“Get ready for your mind to expand with new thoughts, your heart to enfold God’s people, your eyes to glimpse God’s plan, and your faith to soar in worship. My applause!”
—Anne Graham Lotz, speaker, author of The Magnificent Obsession

“Ray Bentley has immersed himself in the land of the Book and the people of the land. His challenge to not only study prophecy, but also to live it, rings with the clarity of a bell. He makes an ancient subject come alive, and I found this book riveting and convicting and moving.”
—Jerry B. Jenkins, New York Times best-selling author of the Left Behind series

“In The Holy Land Key, Ray Bentley ties together history, current events, prophecy, Israel’s feasts and festivals, and the progress of the gospel among Jews and Arabs. Ray also explains the mystery of the Messiah’s return, which God laid out for us to see through dramatic signs in the heavens. This book will challenge your thinking, fill you with hope, and bless your life.”
—Tom Doyle, vice-president of e3 Partners, author of Dreams and Visions: Is Jesus Awakening the Muslim World?

“Seeing prophecy through the eyes of God’s chosen people, Israel, is the only way to fully understand all of its implications. Ray Bentley sets forth the importance of being on God’s calendar and seeing the patterns that are visible in God’s feasts. Ray gives us a greater understanding of the signs in the heavens as God’s signals of coming events. I am glad he is getting the truth out in these last days, as we know time is short!”
—Pastor Mark Biltz, founder of El Shaddai Ministries

“What I appreciate most about The Holy Land Key is the common ground Ray Bentley and I have in our hearts. We both desire that out of every tribe, tongue, and nation countless numbers of individuals would be saved and brought into the kingdom of Christ. I appreciate the growing interest Ray has in the perspective of Arab and Palestinian believers living in the land. We do not have to allow differences to keep us from loving each other and enjoying the wondrous friendship and fellowship Christ brings.”
—Botrus Mansour, general director of Nazareth Baptist School, author of When Your Neighbor Is the Savior

“The Holy Land Key offers a look into the heart of one who is a lover of God’s people and a true friend of the Jewish people. Ray’s longtime interest in God’s covenant with His people, Israel, and his insatiable desire to find God’s mind on the issues of the conflict in the Middle East, make this book a pleasure to read.”
—Tass Saada, founder and president of Seeds of Hope, author of Once an Arafat Man

While on vacation this year, I had the privilege to read Ray Bentley’s new book on Israel.  I am not a stranger to the Holy Land, having been there many times, but I learned so many things about Israel and God’s people that I did not know.  The book reads like an adventure story.  It causes you to look over your shoulder at God’s continued blessing upon His people and to look forward to the many prophecies that are yet to be fulfilled.  When you are finished with this read, you will want to book a tour of Israel!
—David Jeremiah, founder & CEO of Turning Point Ministries

RAY BENTLEY’s close ties with Israelis and Palestinians have given him a rare insider’s perspective on the involvement of Jews, Arabs, and Christians in the events to come. A popular speaker, Bentley’s feet-on-the-ground approach brings life and surprising insights to the study of ancient prophecies. The founding pastor of Maranatha Chapel near San Diego, he also hosts the daily Maranatha Radio program, broadcast nationally.

The Holy Land Key opens our eyes to little-known aspects of prophecy, including:
·         Gods master plan revealed in the seven Feasts of the Lord
·         The ingathering of Gods people, and the ways Israelis are hearing from God today
·         Significant prophetic patterns discovered in the lunar cycle
·         Awe-inspiring testimonies to Gods glory spelled out in the night sky
·         Glimpses of Gods future kingdom revealed in the stories of well-known figures from Scripture

How can Christians be in prayer for the nation of Israel – the nation of God’s chosen people? Download a free guide that gives you seven specific points for prayer, Scriptures, and prayers to aid you as you commune with God on behalf of Israel and the people there. Click here to download.

Want to know more about the people of Israel? Don’t miss learning about the significant prophetic signs contained in stories of biblical characters, in Gods creation, and in the lives and actions of todays Israelis and Palestinians. Read about them in the new book The Holy Land Key by Ray Bentley. Click here to read a sample chapter from The Holy Land Key.