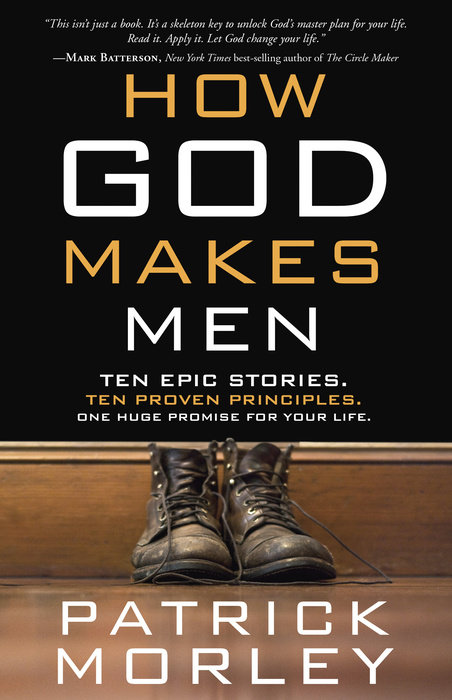 About How God Makes Men

“All through the Bible, we see stories of bold and brash men who followed God’s call into some incredible adventures. In How God Makes Men, Patrick Morley reminds us that God still makes those kinds of guys.”—Dave Ramsey, New York Times bestselling author and nationally syndicated radio show host

God’s Way for You to Become God’s Man

Let’s face it—men today are under severe attack. The battle line against biblical manhood is clearly drawn and fiercely contested. More than ever, men who want to follow Christ are asking:

• Why is it so hard to live an authentic Christian life?
• Who will show me how to thrive as a father, a husband, and on the job?
• What should I do when I’m being tested to the breaking point?

Fortunately, the Bible preserves crucial details about the powerful lessons learned by men who have already faced and answered these questions. In How God Makes Men, renowned expert on men’s issues Patrick Morley takes you into Scripture for a first-hand encounter with:

• Ten epic stories of the Bible’s most talked-about men
• Ten proven principles—based on their failures and successes—that show how God works in a man’s life, and how you can cooperate with Him in yours
• The huge promise that you can become the man God created you to be

Don’t settle for less. Join Patrick on this epic adventure of becoming God’s man. You’ll discover how to prevail in tough times and release God’s power in every area of your life.

Praise for How God Makes Men

“Don’t we all sometimes feel like there’s another man coiled up inside us who desperately wants to get out? In How God Makes Men, Pat Morley is going to show you God’s way to help you release that man. This isn’t just a book. It’s a skeleton key to unlock God’s master plan for your life. Read it. Apply it. Let God change your life. You’re going
to love this book!”
—Mark Batterson, New York Times best-selling author of The Circle Maker

“Pat Morley knows men—what they want, what they need, and God’s way of helping them get it. Now he has written a watershed book that clearly explains God’s role in changing men’s lives. After unpacking ten timeless principles of how God forged our Bible heroes, Pat will help you connect the dots to your life today. I highly recommend How God
Makes Men for your personal reading or small group.”
—Dr. Tony Evans, president of the Urban Alternative and senior pastor of Oak Cliff Bible Fellowship

“There are all kinds of help out there to encourage us to be better men. But nothing compares to the manhood wisdom drawn directly from God’s Word. And that’s what Patrick Morley richly blesses us with in How God Makes Men. I highly recommend you drink deeply from it.”
—Robert Lewis, founder of Men’s Fraternity

“I believe that men are under attack in our culture. Television and other media feed us a steady stream of weak, complacent men—but that’s not the kind of man you see in Scripture! All through the Bible, we see stories of bold and brash men who followed God’s call into some incredible adventures. In How God Makes Men, Patrick Morley reminds us that God still makes those kinds of guys.”
—Dave Ramsey, New York Times best-selling author and nationally syndicated radio-show host

“This is not a book. It’s a gift. Patrick Morley has taken what decades of faithful ministry to men has taught him and laid this wisdom atop the incredibly poignant, true stories of men in the Bible. What God is up to in your life and mine has everything to do with our learning obedience and a faithful walk with Him…while He writes our story. Because of God’s grace, our story even has a chance to be epic. Depending on what you and I need right now, this book will be either an encouragement or a necessary kick in the pants.”
—Dr. Robert Wolgemuth, best-selling author

“Pat Morley is a masterful teacher of men. How God Makes Men is his most ambitious project since his best-selling Man in the Mirror twentyfive years ago. It’s a fascinating blend of the thousands of up-close-and-personal conversations with men in a variety of circumstances in a turbulent world matched with the stories of ten Bible heroes and how they faced their own strikingly similar issues. There is nothing quite like it!”
—Bob Buford, founder of Leadership Network and author of Halftime and Finishing Well

“God takes strong men, breaks them down and makes them weak. No man wants to go through this, but this is the path to being used by God. Pat Morley has experienced this and understands the process. For the man who is broken and confused, How God Makes Men will bring hope, healing, and biblical clarity. I read it, highlighted it, and marked it up. That to me is the acid test for a valuable book.”
—Steve Farrar, author of Point Man

“No matter how much you already know—or don’t know—about God, this captivating book is going to help you grow leaps and bounds in your relationship with Christ. Pat clearly demonstrates how God makes a man by using the personal stories of ten great biblical characters to show us how we, too, can adopt ten life-changing principles
that are the trademark of God’s man. Pat’s knowledge and passion to help every man be the person God created him to be makes How God Makes Men a must-read!”
—Kyle Vann, energy consultant and retired CEO of Entergy-Koch LP

For three decades Patrick Morley has been regarded as one of America's most respected authorities on the unique challenges and opportunities that men face.

After spending the first part of his career in the highly competitive world of real estate development, Patrick has been used throughout the world to help men think more deeply about their lives.

In 1973 Patrick founded Morley Properties, which, for several years, was hailed as one of Florida's 100 largest privately held companies. During this time he was the president or managing partner of 59 companies and partnerships.

Every Friday morning since 1986, Patrick has taught a Bible study to approximately 5,000 men —150 men live in Orlando, Florida and the others through a Video Bible Study webcast over the Internet in all 50 states and throughout the world.
In 1989 he wrote The Man in the Mirror, a landmark book that poured from his own search for meaning, purpose, and a deeper relationship with God. With over 3,000,000 copies, this best-selling book has captured the imaginations men worldwide, and was selected as one of the 100 most influential Christian books of the twentieth century. He has written 18 books—six of which have received critical acclaim—and has readers in over 48 countries.

In 1991, Patrick founded Man in the Mirror which has impacted the lives of 10,000,000 men worldwide, has distributed 9,000,000 books, and last year worked with 30,000 church leaders to more effectively disciple men. Through his speaking and writing he is a tireless advocate for men, encouraging and inspiring them to change their lives in Christ. He has written over 500 articles to help men and leaders, has appeared on several hundred of radio and television programs, and speaks to men daily through The Man in the Mirror radio program carried over 300 stations nationwide.

"The ministry of Man in the Mirror exists," says Patrick Morley, "in answer to the prayers of all those wives, mothers, and grandmothers who have for decades been praying for the men in their lives."

Patrick Morley graduated with honors from the University of Central Florida, which selected him to receive its Distinguished Alumnus Award in 1984. He has earned a Ph.D. in Management and completed post-graduate studies at the Harvard Business School and Oxford University, and graduated from Reformed Theological Seminary. He lives in Winter Park, FL with his wife, Patsy. They have two married children and four grandchildren.

About How God Makes Men Lets face it, men today are under severe attack. The battle line against biblical manhood is clearly drawn and fiercely contested. More than ever, men who want to follow Christ are asking: Why is it so hard to live an authentic Christian life? Who will show me how to thrive as a father, a husband, and on the job? What should I do when Im being tested to the breaking point?

You are no ordinary child

You created my inmost being;
you knit me together in my mother’s womb.
Your eyes saw my unformed body.
All the days ordained for me
were written in your book
before one of them came to be.


Bottom line? Your life is also a spiritual phenomenon. You are one of God’s crowning achievements. You are the full expression of His creative geniusand no troubled marriage or disastrous employment record or sin-dogged season on your part can possibly change this fact.
God was at His very best when He made you.

Excerpted from How God Makes Men by Patrick Morley

Daily Reflection: When times are tough, how can you remind yourself of Gods love for you as His unique child?

Don’t give up. Believe the gospel. God is sovereignly orchestrating your life. Nothing done to you by human decision can ever be done apart from God’s will. Whatever others have meant for evil, He will use it for good.

Always remember this: Joseph carried his pain for over two decades until God revealed the liberating truth that nothing can happen to us by human decision apart from His knowledge and father-like concern. That’s what the Bible says. Not even one sparrow can fall to the ground apart from His will.

What have you been carrying around, and for how long? Whatever it is, God wants you to know that He is making you into part of His larger plan to redeem this world and bring glory to His name. That’s who you are.

… I’ve got some really great news for you. It’s all wrapped up in the one sentence that best describes my own life: Because God is good, your life will not turn out like you planned.

That’s because God has a better plan. A much better plan. So what is this plan, and how can you make it your own?

God’s plan is made up of strikingly relevant, time-tested lessons written down and preserved for us in the Bible. It pulsates with stories about men who released and sustained the passion of their faith. They became the men God created them to be.

And you can too.

Excerpted from How God Makes Men by Patrick Morley

Daily Reflection: When was the last time you turned to the Bible for mentors?