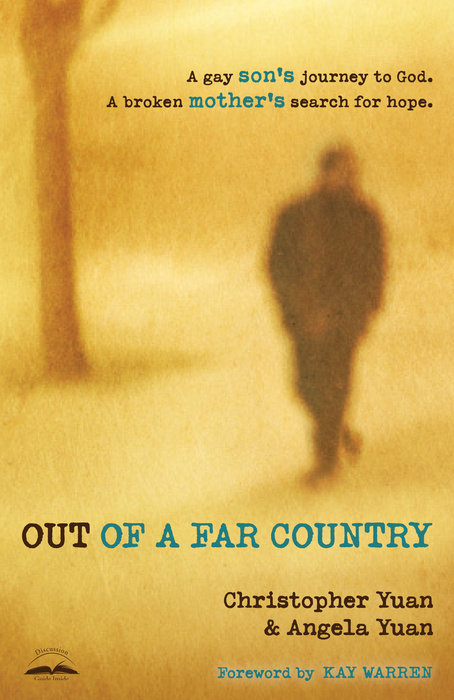 Out of a Far Country

A Gay Son's Journey to God. A Broken Mother's Search for Hope.

About Out of a Far Country

Coming Out, Then Coming Home

Christopher Yuan, the son of Chinese immigrants, discovered at an early age that he was different. He was attracted to other boys. As he grew into adulthood, his mother, Angela, hoped to control the situation. Instead, she found that her son and her life were spiraling out of control—and her own personal demons were determined to defeat her.

Years of heartbreak, confusion, and prayer followed before the Yuans found a place of complete surrender, which is God’s desire for all families. Their amazing story, told from the perspectives of both mother and son, offers hope for anyone affected by homosexuality.

God calls all who are lost to come home to him. Casting a compelling vision for holy sexuality, Out of a Far Country speaks to prodigals, parents of prodigals, and those wanting to minister to the gay community.

“But while he was still a long way off, his father saw him and felt compassion, and ran and embraced him and kissed him.”  - Luke 15:20

Includes a discussion guide for personal reflection and group use.

Praise for Out of a Far Country

“Christopher Yuan and Angela Yuan have told the story of their miraculous journey from broken lives, relationships, and dreams to a place of hope and healing. Out of a Far Country brings home the living truth that in the midst of a broken and hurting world, God is at work to redeem, renew, and reconcile his beloved. I’m particularly happy to endorse this book because Christopher, like myself, was broken in prison and redeemed by Christ.”
—Chuck Colson, founder of Prison Fellowship and the Chuck Colson Center for Christian Worldview

“Out of a Far Country reads like a modern rendition of the prodigal son parable, only it is more gripping. The journey taken by Christopher Yuan is rarely documented. Be prepared, for the raw emotions of both mother and son authentically mark every page. The spiritual lessons to be gained from this book are many. May it gain a vast audience!”
—J. Paul Nyquist, PhD, president of Moody Bible Institute

“This is a moving account of how an Asian mother’s fragile love turns into a prayerful, patient, and tenacious force of forgiveness. It is also a gripping narrative of a son’s search for belonging and meaning. Out of a Far Country breeds hope in every despairing heart.”
—Lisa Espineli Chinn, director of International Student Ministries for InterVarsity/USA

“The Good Shepherd knows his sheep and calls them by name. Christopher Yuan, trapped in a life of drugs and sexual addiction, heard that call and rose to follow Jesus. His and his mother’s account of that rising is a profound story of redemption that all of us in this broken generation need to hear.”
—Duane Litfin, president emeritus of Wheaton College in Illinois

“Relevant, courageous, fascinating, and much more. I have known the Yuans for many years, and their walk is in line with their talk. This important and needed story goes against the wind, but it is one hundred percent in the right direction.”
—Dr. George Verwer, founder and former international director of Operation Mobilisation

“Out of a Far Country is a true-life parable of saving grace for a prodigal mother and a wayward son who needed God’s forgiveness. Their story will warm the heart and lift the spirit of every parent who prays for a wandering child and every believer who needs to be reminded why the gospel is good news.”
—Dr. Philip G. Ryken, president of Wheaton College in Illinois

“At one point, Angela and Christopher were living worlds apart. I have heard their story countless times, and it never grows old. I know you will be amazed by the God who did the impossible to bring this mother and son back together.”
—Alan Chambers, president of Exodus International

“This is the story of God’s persistent chase of a wayward son through the prayers and love of a determined mother. But even more, it is a testimony to the fact that loving God is a far more satisfying pursuit than following our own desires. I am thankful that Christopher and Angela are willing to be so transparent about their journey. Christopher’s desire to follow Christ regardless of the struggle stands as a model for all who desire to love God with all their heart.”
—Dr. Joseph M. Stowell, president of Cornerstone University in Grand Rapids, Michigan

“God snatched Christopher Yuan from a desperately empty life and offered him the hope of Jesus Christ. This is a story of God’s redemption, love, and mercy in the midst of overwhelming sin and a heart that was far from God. Get two copies of this book—you will want to give one to a friend who needs Jesus.”
—Dr. James MacDonald, senior pastor of Harvest Bible Chapel in Rolling Meadows, Illinois

“The story of Angela Yuan and Christopher Yuan, Out of a Far Country, will minister rich grace and hope to mothers who are praying for the return of a prodigal, to the prodigals they love, and to anyone battling a sinful addiction that seems impossible to overcome. This is a deeply moving account of God’s amazing power and love.”
—Nancy Leigh DeMoss, best-selling author, host of the Revive Our Hearts radio program

CHRISTOPHER YUAN, DMin, has taught at the Moody Bible Institute for over ten years and his speaking ministry on faith and sexuality has reached five continents. He speaks at conferences, on college campuses, and in churches. He co-authored with his mother, Angela, their memoir (now in seven languages), Out of a Far Country: A Gay Son's Journey to God, A Broken Mother's Search for Hope. He is also the author of Giving a Voice to the Voiceless. Dr. Yuan holds degrees from Moody Bible Institute, Wheaton College, and Bethel Seminary.

Christopher Yuan and Angela Yuan travel nationally and internationally to speak at churches, conferences, youth conventions, and colleges about God’s desire for prodigals of all types to return to him. Angela is a businesswoman and advocate for Chinese-American cultural causes. Christopher teaches at Moody Bible Institute (MBI). He holds a bachelor's degree from MBI and an master's degree in biblical exegesis from Wheaton College Graduate School. He is currently pursuing a doctorate of ministry from Bethel Seminary.

Coming Out, Then Coming Home

Out of a Far Country reminds us that God calls all of us, whether we have heterosexual feelings or homosexual feelings, to a life of holy sexuality as we embrace our true identity in Christ.

NEWS: “Out of A Far Country” Author Featured in The Christian Post

Speaking at the Ethics and Religious Liberty Commission’s National Conference about his own experience of becoming a Christian as a same-sex attracted man, Moody Bible Professor Christopher Yuan and author of Out of A Far Country, urged Christian parents to love their lesbian, gay, bisexual, and transsexual children and lead them back to the Gospel.

“Parents, love your LGBT or same-sex attracted children and point them to a life of costly discipleship following Jesus,” states Yuan.

NEWS: “Out of A Far Country” Author Featured on The Christian Post

Out of A Far Country author Christopher Yuan responds on The Christian Post, to Exodus International President Alan Chamber’s apology.

Out of A Far Country by Christopher Yuan and Angela Yuan has been chosen by The Parchment Girl as one of her “Top 10 Nonfiction Books of 2011.”

Ranking #2 on the list,  mother and son share their amazing story of the power of Gods love and what prayer can doalong with the redemption and restoration of a family in crisis. Out of a Far Country is a real-life story of what happens when God calls the lost to come home to Him.

Out of A Far Country co-author Christopher Yuan’s interview with Focus on the Family’s CITIZENLINK Magazine is availalbe online. Once a convicted drug dealer serving time in prison, Yuan now teaches at Moody Bible Institute. To read about his journey out of homosexuality, click here.

PODCAST: Out of a Far Country by Christopher Yuan

PODCAST: Out of a Far Country by Christopher Yuan

VIDEO: Out of a Far Country based on the book by Christopher Yuan and Angela Yuan