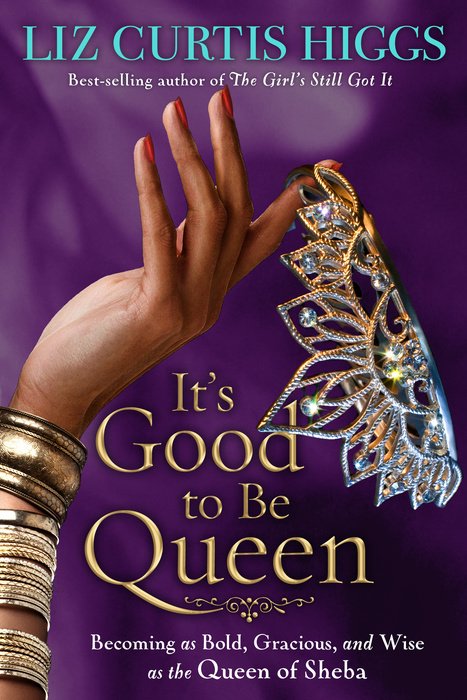 It's Good to Be Queen

Becoming as Bold, Gracious, and Wise as the Queen of Sheba

About It's Good to Be Queen

Sheba journeyed across the desert with a caravan of riches, only to find the greatest treasure of them all—and so can you.

When it comes to famous queens of the Bible, we know the good one, Queen Esther, and the bad one, Queen Jezebel. Now meet the wise one, the queen of Sheba, who traveled to Jerusalem to test the mind and heart of a king.

Her quest for wisdom will surprise you, challenge you, inspire you, change you. This wealthy royal from antiquity will show you how to live boldly, seek after truth, ask the right questions, encourage others, receive graciously, and honor the Lord above all.

Shedding new light on this ancient biblical role model, Liz Curtis Higgs unveils timeless wisdom for all who aspire to please the king of Kings.

Praise for It’s Good to Be Queen:

“Liz Curtis Higgs does it again—a touching, beautiful look at one of the Bible’s most captivating women. This is a stunning blend of research, insight, and practical application that will challenge you and fill you with hope. You won’t see the queen of Sheba or yourself in the same way again. Highly recommended.”
—Margaret Feinberg, author of Fight Back with Joy

“Liz has the wonderful gift of making biblical history come to life. By the time I finished reading this fantastic book, I felt as if I knew the queen of Sheba. If you long to live, love, and finish well, you will treasure this book!”
—Sheila Walsh, author of Five Minutes with Jesus

“Liz Curtis Higgs continues to knit our hearts with spectacular women in the Bible. In this treasure of a book, you will be captivated with the story of the queen of Sheba and how her all-out search for wisdom led her to the One of all wisdom. Thank you, Liz, for leading us into the riches of God’s Word.”
—Lysa TerKeurst, New York Times best-selling author of The Best Yes and president of Proverbs 31 Ministries

“Liz is someone who can hug you around the neck and still manage to kick you in the behind at the same time—my favorite kind of human. Prepare to laugh and cry and change.”
—Jennie Allen, visionary of IF:Gathering and author of Restless

“Liz Curtis Higgs is an expert at breaking down a Bible story and bringing it to life. Then she reaches out her hand and invites us to join her, right in the midst of the story, as she reveals the riches hidden there. Settle in with her words. Open your heart to the story. Find yourself on a journey of transformation and grace.”
—Deidra Riggs, author of Every Little Thing

“An unparalleled feast of rich truth, direly needed wisdom, and the most divine servings of grace. Every page sparkles not only with wit and warmth but with Liz’s signature, unmatched insights. Liz is the comforting, courage-giving friend every woman prays for. There’s no voice like Liz’s. And there’s no woman who can afford to miss the epic wisdom of the queen of Sheba.”
—Ann Voskamp, New York Times best-selling author of One Thousand Gifts and The Greatest Gift

“In this stunning account of a woman that most people know very little about, Liz has masterfully (and responsibly) brought fresh insights to the story of the mysterious queen of Sheba. Her writing unites imagery and research in a seamless, spectacular way, and I learned many facts that breathed life into a few short passages of Scripture. I walked away from this book inspired to be more like the courageous, bold, wise, humble, and generous woman I met on the page. This might be Liz’s best work yet.”
—Angie Smith, best-selling author of Chasing God and What Women Fear

"Liz Curtis Higgs frequently writes on women’s issues. Here she tells the story of the Queen of Sheba. The Bible tells us little about this queen except for her visit to King Solomon in the first 13 verses of I Kings, chapter 10.  The queen is intrigued by Solomon’s reputation and wants many questions answered.

Higgs mixes a bit of fiction with her nonfiction. As an introduction to her work, she pens a brief message signed “Sheba.” Concluding each of the first nine chapters is another short note from Sheba, which includes her comments on her situation as it is treated in the given chapter. In this manner, Higgs discusses each of the 13 verses phrase by phrase.

It’s Good to be Queen, written in Higgs’ down-to-earth, informal style, is well annotated and includes interesting, thought-provoking questions for further study. It also includes comments about the implications of the verses and story for the reader’s life."
—Congregational Libraries Today

In her bestselling series of Bad Girls of the Bible books, workbooks, and videos, Liz Curtis Higgs breathes new life into ancient tales about the most infamous—and intriguing—women in scriptural history, from Jezebel to Mary Magdalene.   She is the author of more than 30 books, with more than 4.6 million copies in print. Her popular nonfiction books include Bad Girls of the Bible, Really Bad Girls of the Bible, Unveiling Mary Magdalene, Slightly Bad Girls of the Bible, Rise and Shine, and Embrace Grace. She’s also the author of the award-winning novels Here Burns My Candle and Mine Is the Night.   Her children’s Parable series received a 1998 ECPA Gold Medallion for Excellence, her nonfiction book Embrace Grace won a 2007 Retailers Choice Award, and her novel Whence Came a Prince received a 2006 Christy Award for Best Historical Novel. Here Burns My Candle was named 2010 Best Inspirational Romance by Romantic Times Book Reviews, and her 2011 novel, Mine Is the Night, was a New York Times bestseller.  On the personal side, Liz is married to Bill Higgs, PhD, who serves as director of operations for her speaking and writing office. Liz and Bill enjoy their old Kentucky home, a nineteenth-century farmhouse in Louisville, and are the proud parents of two college grads, Matthew and Lillian. Visit Liz’s website, LizCurtisHiggs.com.

Sheba Journeyed Across the Desert with a Caravan of Riches,  then Discovered the Greatest Treasure of All.  So Can You.

When it comes to famous queens of the Bible, we know the good one, Queen Esther, and the bad one, Queen Jezebel. Now meet the wise one, the queen of Sheba, who traveled to Jerusalem to test the mind and heart of a king.

Her journey will surprise you, challenge you, inspire you, change you. This wealthy royal from antiquity will show you how to live boldly, seek after truth, ask the right questions, encourage others, receive graciously, and honor the Lord above all.

Shedding new light on this ancient biblical role model, Liz Curtis Higgs unveils timeless wisdom for all who aspire to please the king of Kings.

A stunning blend of research, insight, and practical application...

Margaret Feinberg, author of Fight Back With Joy

You will be captivated with the story of the queen of Sheba...

An unparalleled feast of rich truth.

Ann Voskamp, author of the New York Times bestsellers One Thousand Gifts and The Greatest Gift

Over the centuries the queen of Sheba’s story has been embellished by Christians, Jews, and Muslims alike. From chaste virgin to seductress, from goddess to she-devil, Sheba has become “whatever history wanted her to be.”

In It’s Good to Be Queen: Becoming as Bold, Gracious, and Wise as the Queen of Sheba (Waterbrook, July 21, 2015), bestselling author Liz Curtis Higgs separates fact from fiction on the queen of Sheba, uncovering the fascinating background on this wealthy royal from antiquity who made a two-month journey to meet and test the renowned King Solomon and ended up praising his God.

Higgs solidly researched this biblical legend, consulting 40 Bible translations along with 45 resource books and commentaries. “What can we know for certain about this queen of the desert? The things that truly matter: her words and actions, her motives and methods as recorded in Scripture,” Higgs says. “Together they reveal a woman almost as sage as Solomon himself.”

An internationally-known Bible teacher, Higgs has breathed new life into ancient tales of booth good and bad female characters in scriptural history through her numerous Bible studies, including the Bad Girls of the Bible series, which has sold more than one million copies.

Now, with her warm, witty and engaging style, Higgs brings her readers along on the queen’s journey, sharing numerous gems of biblical insight that will surprise, challenge and inspire. She encourages her readers to follow the queen’s example of:

· living boldly
· seeking after truth
· asking the right questions
· encouraging others
· receiving graciously
· giving generously, and
· honoring the Lord above all

An in-depth study guide is included in It’s Good to Be Queen to help individuals and groups practically apply the lessons from these timeless truths.

ABOUT THE AUTHOR
Liz Curtis Higgs has one goal: to help women embrace the grace of God with joy and abandon. Her messages are biblical, encouraging, down-to-earth, and profoundly funny, helping sisters and seekers experience the depth of God’s love. Higgs is the author of 32 books with 4.5 million copies in print, including her million-selling series, Bad Girls of the Bible, and The Girl’s Still Got It. She has also penned several award-winning historical novels, two inspired by the book of Ruth—Here Burns My Candle and Mine Is the Night, a New York Times bestseller. Higgs has spoken at 1,700 women’s conferences in all 50 United States and 14 countries and has appeared on more than 700 media outlets including NPR, A&E, PBS, Salon.com, “Focus on the Family,” “Life Today,” and “Midday Connection” on the Moody Network. She and her husband, Bill, along with their grown children, make their home in Louisville, Kentucky.