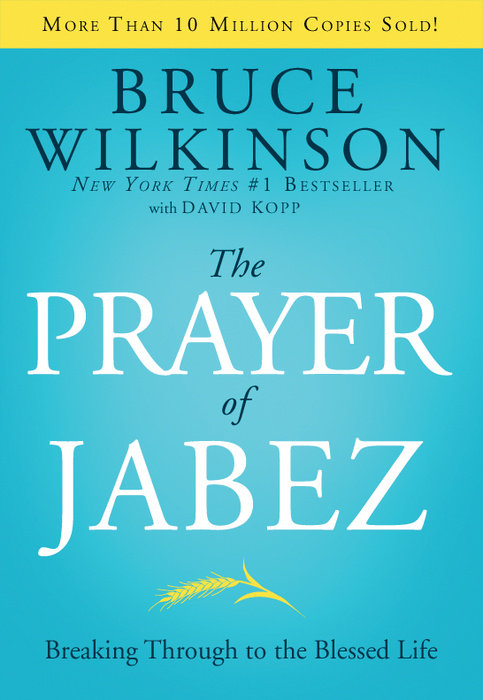 The Prayer of Jabez

Breaking Through to the Blessed Life

About The Prayer of Jabez

It’s a timeless prayer that produces timely results! Bruce Wilkinson takes readers to 1 Chronicles 4:10 to discover how they can release God’s miraculous power and experience the blessings God longs to give each of us. The life of Jabez, one of the Bible’s most overlooked heroes of the faith, bursts from unbroken pages of genealogies in an audacious, fourpart prayer that brings him an extraordinary measure of divine favor, anointing, and protection. Readers who commit to offering the same prayer on a regular basis will find themselves extravagantly blessed by God, and agents of His miraculous power, in everyday life.

Do you want to be extravagantly blessed by God?

Are you ready to reach for the extraordinary? To ask God for the abundant blessings He longs to give you? Join Bruce Wilkinson to discover how the remarkable prayer of a little-known Bible hero can release God’s favor, power, and protection. You’ll see how one daily prayer can help you leave the past behind—and break through to the life you were meant to live.

When The Prayer of Jabez first released in 2000 and sold nine million copies in two years, Bruce Wilkinson’s mailbox was flooded with countless personal stories of answered prayer. God’s mighty hand was using the prayer to change lives in both small and dramatic ways. Such undeniable testimonies make it impossible to ignore God’s presence, active and alive today! This repack meets the demand that continues to ask for the original bestseller—now with a stunning new look!

Bruce Wilkinson is recognized as one of the world's foremost Christian teachers and speakers. He is best known, though, as the author of the New York Times #1 bestseller, The Prayer of Jabez, and other bestsellers, including A Life God Rewards, Secrets of the Vine, and The Dream Giver. He is the founder of WorldTeach, a global initiative to train Bible teachers in every nation. Wilkinson also founded Dream for Africa, a humanitarian agency that has taken on AIDS, orphan care, and hunger in sub-Saharan Africa. Bruce and his wife, Darlene, have three children and six grandchildren. They live outside Atlanta.

Do you want to be extravagantly blessed by God? Read the first chapter of The Prayer of Jabez. Are you ready to reach for the extraordinary? To ask God for the abundant blessings He longs to give you? Join Bruce Wilkinson to discover how the remarkable prayer of a little-known Bible hero can release Gods favor, power, and protection. Youll see how one daily prayer can help you leave the past behindand break through to the life you were meant to live.

“Do you think God has favorites? Certainly God makes His love available to all, and Jesus came to earth so that “whosoever” might call on His name and be saved.

But Jabez, whose prayer earned him a “more honorable” award from God, might have made the case that God does have favorites. His experience taught him that equal access to God’s favor does not add up to equal reward. What happened to some of the others named along with him in Chronicles? Idbash, Hazelelponi, and Anub, for example. What honors and awards did they get from God?
Simply put, God favors those who ask. He holds back nothing from those who want and earnestly long for what He wants.”

Excerpted from The Prayer of Jabez by Bruce Wilkinson

Daily Reflection: What earnest prayer are you holding in because [ … ]