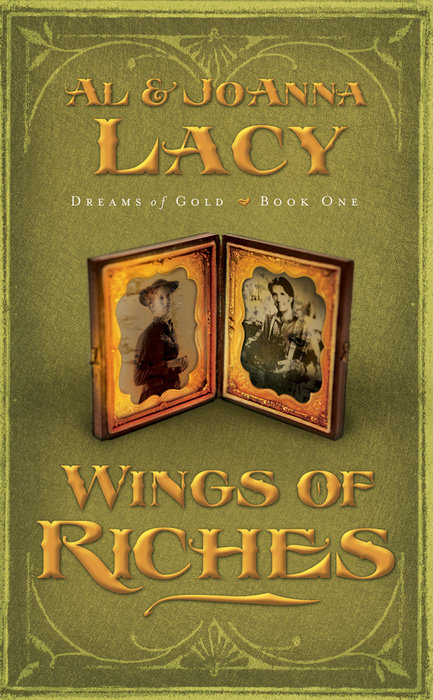 Part of the Dreams of Gold Series Series

About Wings of Riches

Introducing a new trilogy called Dreams of Gold, master narrators Al and JoAnna Lacy tell the stories of three major gold strikes that took place in North America in the nineteenth century. Craig Turley, the son of a wealthy Manhattan business owner, longs to make his way in the world. Kathy Ross is the twenty-year-old family governess who cares deeply for Craig and secretly prays for his salvation. As word spreads across the country of the gold strike in California, Craig leaps at the opportunity to forge his own success. But when Craig finds that his shack has been broken into and all of his fortune has been stolen, could it be that God is trying to send him a message? Has God allowed this in his life in order to bring him to surrender? Will this prodigal son find his way home to recover all that God has truly intended for him?

When gold was discovered out West during the nineteenth century, men rushed from all parts of the globe to stake their claims. Fortunes were made and lost, families uprooted, and a continent shaped by men driven by dreams of gold.

1849. Craig Turley was born with a silver spoon in his mouth, the son of a wealthy New York businessman. Craig has always felt he had something to prove, so when gold is found near Sacramento , he packs his bags for California , ready to try his wings. His younger sister and her governess, Kathy, hate to see him go—especially because they’ve recently trusted their lives to Jesus Christ and Craig has not. Kathy is praying for his salvation, his safe return...and that he’ll come to love her as much as she does him. In the rough-and-tumble world of the gold rush, will this city boy find the wealth he seeks? Or does he have his eyes on the wrong kind of riches?

“This was a fascinating project for both of us because of our love of American history. So often in the Bible, gold and the lesser precious metals are linked with money and other possessions that make men rich—the pursuit of which is frequently tied to greed and covetousness, which destroys lives. As our story will reveal, many great fortunes were won...and many were lost. Riches are spoken of in the Bible as often deceptive, unsatisfying, hurtful, and uncertain. Let each of us take note of what the Spirit of God told Paul to write to his son in the faith, Timothy: ‘Charge them that are rich in this world, that they be not high-minded, nor trust in uncertain riches, but in the living God, who giveth us richly all things to enjoy’ (1 Timothy 6:17).”

Al Lacy is an evangelist and author of more than 100 historical and western novels, including the Journeys of the Stranger, Angel of Mercy, and Mail Order Bride series. There are more than three million of his books in print. He lives in Florida with his longtime collaborator and wife of over 40 years, JoAnna.

JoAnna Lacy is a retired nurse and the coauthor with her husband, evangelist and bestselling writer Al Lacy, of numerous historical and western novels, including the Mail Order Bride, Hannah of Fort Bridger, and Shadow of Liberty series'. They have been married for over 40 years and live in Florida.

Also in the Dreams of Gold Series Series