Designing My Life of Choppers, Family, and Faith

A behind-the-scenes look at reality series American Chopper from Paul Teute Jr., including a photos from his life, as well as spectacular shots and the backstory of his most famous bikes.

Paul Teutul Jr. may be the world’s most creative builder of custom “chopper” motorcycles. His talents wowed millions during the ten-year run of the popular TV series American Chopper and American Chopper: Senior vs. Junior. So did painful battles with his father, which culminated in 2008 when Paul’s father fired him.

Told with “Paulie’s” plainspoken candor, The Build reveals his life behind the scenes in a reality show made famous by incredible bikes, hilarious pranks, and memorable arguments. You’ll also learn the details of his youth growing up in a conflicted family, the tensions at Orange County Choppers, his relationship with brother Mikey and other employees at OCC, and his courtship and marriage to his wife, Rachael. And for the first time, Paul explains the role God has played in his life and how faith has kept him steady in the rocky relationship with his father.

In The Build are Paul’s insights on how he created some of his more memorable designs, including the Black Widow, 9/11 Memorial, Cadillac, and build-off bikes. Paul also reveals the one feature he determines first that drives the distinctive look of each of his creations. Whether you’re a fan of American Chopper or just someone who loves motorcycles, the visual arts, or an inside look into a memorable story, you’ll be inspired by Paul’s intriguing journey.

“At the very beginning of what we came to know as reality TV was American Chopper—inspiring motorbike lovers all over the world with the beauty of what could be imagined into being on two wheels. Here’s Paul Jr. telling his personal journey—still imagining, still building. Every man’s journey is his own; every man’s heart needs building from the inside.”
—Russell Crowe, actor, film producer, musician

“Paul Jr’s book The Build is a must-read. I respect his talent, but mostly I respect how he is living out his faith in the public eye. Paul’s candidness about his father is not to attack but to shine the light of truth on how a son is affected by his father. Thanks for writing this book, Junior!”
—Todd Hoffman, “Gold Rush Todd”

PAUL TEUTUL JR was just 27 when American Chopper: Jet Bike premiered on the Discovery Channel, featuring “Paulie” and his father, Paul Sr., building a custom chopper for 2002's Laconia Bike Week. Part of Bike Weekend, the one-off special and the intrinsic family dynamics so captivated audiences that a full series following the Teutuls and their business, Orange County Choppers, soon followed in 2003. Six years of family ups and downs ensued, culminating in 2009 with Senior firing Junior, who waited out his one-year non-compete clause before establishing his own business, Paul Jr. Designs. Today, Paul Jr. Designs continues to thrive, producing custom bikes for a variety of individual and corporate clients. There have been TV commercials and personal appearances since 2012 as well, but the most important development in Paul's life occurred when his wife, Rachael, gave birth to their son Hudson Seven Teutul in February 2015. 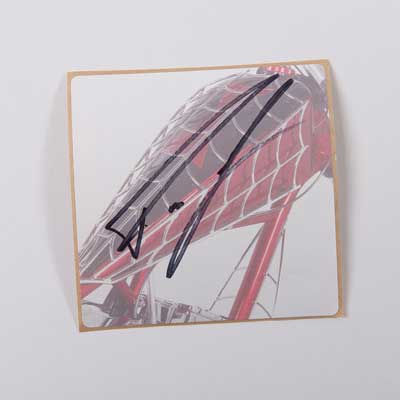 Purchase a copy of The Build by Paul Teutul Jr. and receive a free signed bookplate from the author!

1) Purchase a copy of The Build (hardcover, paperback, or ebook) from your favorite retailer

"At the very beginning of what we came to know as reality TV was American Chopper—inspiring motorbike lovers all over the world with the beauty of what could be imagined into being on two wheels. Here's Paul Jr. telling his personal journey—still imagining, still building. Every man’s journey is his own, every man’s heart needs building from the inside."  —Russell Crowe, actor, film producer, musician

Paul Teutul Jr. is one of the stars of the hit Discovery Channel show “American Chopper” where each week millions of viewers witness his volatile relationship with his father, Paul Teutul Sr., and his world-class expertise at designing one-of-a-kind motorcycles. In The Build: Designing My Life of Choppers, Family, and Faith (Oct. 23, 2018, Trade Paperback, WaterBrook), Teutul shares behind-the-scenes stories from the show’s early days and his life with intimate details of going from a troubled teenager to a worldwide reality TV star and a self-educated custom motorcycle designer.

Teutul’s life changed suddenly with the premiere of “American Chopper.” Audiences were so taken with the intense family dynamics and humorous antics that a full series featuring the Teutuls and their business Orange County Choppers followed, turning the American working class family into international celebrities. Along the way, viewers have been privy to not only Teutul’s creative genius in designing and building custom bikes but his difficult relationship with his father, which culminated in 2009 with Senior firing Junior.

Teutul started his own thriving business in 2009, Paul Jr. Designs, where he creates innovative motorcycle designs for corporate clients, film productions and nonprofits. In early 2018, Discovery Channel revived “American Chopper” for an eleventh season, where the father-son duo “set out reclaim their preeminent bike brands and – hopefully, rebuild some sort of relationship.”

Faith has become an instrumental part of Teutul’s life and a defining part of his journey toward health and healing. He cites conversations with viewers who have related to “American Chopper” because of their own difficult relationships with family members as his driving force behind writing The Build.

In The Build, readers will find:

· Teutul details his early family life with an alcoholic and volatile father and his own issues with substance abuse and rehab
· He introduces family members not seen on the TV show, such as his mother who led him to faith
· Teutul tells how getting fired by his father was one of the best things that could have happened him.
· He reveals how he met his wife Rachael and tough decisions early in their relationship
· A self-taught designer, Teutul offers encouragement to turn hidden talents into big dreams
· Teutul shares how he created some of his most memorable designs, such as the Black Widow and the 9/11 Memorial bike

“A year after the show ended, I went through an emotional stage where I missed the show for the first time,” says Teutul. “I had spent half of my adulthood on television, but it was such a whirlwind that we didn’t have many opportunities to fully appreciate how special our experience was or what a phenomenon the show became. That emotional stage was a period of being able to reflect on our run and realize, Wow, we really did that!”

The Build includes a 32-page photo insert with family photos and project pictures along with detailed information on Teutul’s design approach to some of his most significant projects. Motorcycle enthusiasts, entrepreneurs, designers and Teutul’s TV fans will all find inspiration in “Paulie’s” memorable and inspiring journey.

ABOUT THE AUTHOR:
Paul Teutul Jr. has been molding metal into shape since the age of 12 when he began his apprenticeship at his father’s steel business. He is widely recognized as the chief designer and fabricator of some of the world’s most famous motorcycles. Teutul spent 10 years living his work and family life in front of the cameras for the hit television shows “American Chopper” and “American Chopper: Senior vs. Junior.” Five years after its first run on Discovery Channel ended, “American Chopper” returned to screens for an eleventh season in 2018. Teutul started his career as cofounder of Orange County Choppers and now shares his creativity and unique approach to design through his work at Paul Jr. Designs. Teutul and his wife Rachael and their son Hudson, live in Orange County, New York. For more information, visit www.pauljrdesigns.com

PRAISE FOR THE BUILD

“Paul Jr’s book The Build is a must-read. I respect his talent, but mostly I respect how he is living out his faith in the public eye. Paul’s candidness about his father is not to attack but to shine the light of truth on how a son is af­fected by his father. Thanks for writing this book, Junior!”
—Todd Hoffman, “Gold Rush Todd”