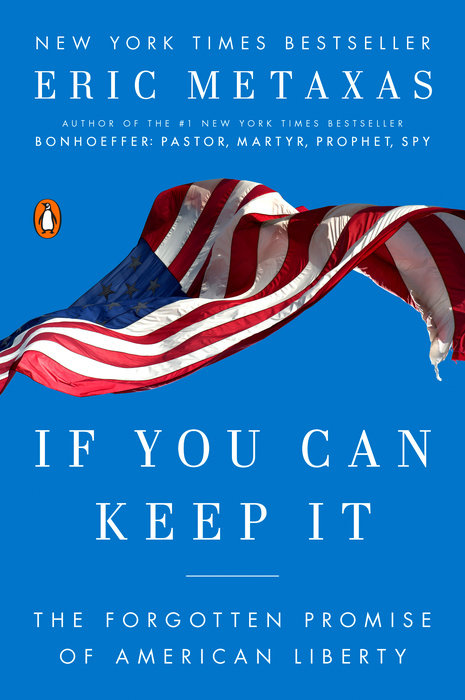 If You Can Keep It

The Forgotten Promise of American Liberty

About If You Can Keep It

In 1787, when the Constitution was drafted, a woman asked Ben Franklin what the founders had given the American people. "A republic," he shot back, "if you can keep it." More than two centuries later, Metaxas examines what that means and how we are doing on that score.

If You Can Keep It is at once a thrilling review of America's uniqueness—including our role as a "nation of nations"—and a chilling reminder that America's greatness cannot continue unless we embrace our own crucial role in living out what the founders entrusted to us. Metaxas explains that America is not a nation bounded by ethnic identity or geography, but rather by a radical and unprecedented idea, based on liberty and freedom for all. He cautions us that it's nearly past time we reconnect to that idea, or we may lose the very foundation of what made us exceptional in the first place.

Praise for If You Can Keep It

"Profound and thoroughly entertaining . . . This book has made me think in ways that I haven’t in years. Metaxas is a major writer. Not to be missed." —Dick Cavett

"If You Can Keep It: The Forgotten Promise of American Liberty—along with such essentials as Up from Slavery by Booker T. Washington and The 5000 Year Leap by W. Cleon Skousen—must be front and center on every reading list." —The Washington Times

"Everyone in every country, at every socioeconomic level, of every religious and secular persuasion, of every political bent, should read it. . . . It’s the book you must read this year." —Martha Rogers, PhD, coauthor of Extreme Trust: Honesty as a Competitive Advantage

"Eric Metaxas [is] one of our nation’s most brilliant and morally serious public intellectuals." —Robert P. George, McCormick Professor of Jurisprudence at Princeton University

"Irresistible . . . compellingly written . . . important. Not only should every American read it—they should then reread it aloud to their children and grandchildren." —Dennis Prager

"A faith-based argument for American exceptionalism . . . that will appeal to Christian readers." —Kirkus Reviews

“Miracles is the sort of book that—once you've read it—you'll wonder where it's been all your life.” —Kathie Lee Gifford, Emmy Award—winning host, The Today Show

“If you’re a skeptic, read this book with an open mind and you might just discover that miracles are real. If you’re already a believer, be ready to be inspired.” —Kirsten Powers, columnist for USA Today and The Daily Beast

“Take the brilliant mind of Eric Metaxas, add the provocative topic of miracles, and get ready to change the way you see reality forever.” —Erwin Raphael McManus, founder of MOSAIC and author of The Artisan Soul: Crafting Your Life into a Work of Art

“Metaxas has done it again. . . . He presents hope for the tone deaf who cannot hear the splendor of the music of the spheres, and he brings in sunlight for modern cave dwellers who have become accustomed to only shadows on the wall of our increasingly windowless world.” —Os Guinness, author of Long Journey Home

“The miracles in Miracles—and Eric's own amazing miraculous experience—bring out the fact that the miraculous gift of eternal life that God provides can be experienced here on earth.” —Luis Palau, international evangelist

“A captivating and inspiring read from start to finish . . . Buy it. This book could change your life.” —James N. Lane, founder of the New Canaan Society and former general partner, Goldman, Sachs & Co.

“Eric Metaxas has written the kind of extraordinary book that not only brings Dietrich Bonhoeffer, his times and his witness vividly alive, but also leaves us yearning to find the same moral character in ourselves.  No biographer can achieve anything higher." —Archbishop Charles Chaput

“Metaxas’ Bonhoeffer: Pastor, Martyr, Prophet, Spy is a modern-day classic that should be on ‘best of’ lists for the decade.” —Relevant Magazine

Eric Metaxas is the #1 New York Times bestselling author of Martin Luther, If You Can Keep It, Bonhoeffer, Amazing Grace, and Miracles. His books have been translated into more than twenty-five languages. His writing has appeared in The Wall Street Journal, The New York Times, and The New Yorker, and Metaxas has appeared as a cultural commentator on CNN, the Fox News Channel, and MSNBC. He is the host of The Eric Metaxas Show, a nationally syndicated daily radio show. Metaxas is also the founder and host of Socrates in the City, the acclaimed series of conversations on "life, God, and other small topics," featuring Malcolm Gladwell, Dick Cavett, and Rabbi Lord Jonathan Sacks, among many others. He is a senior fellow and lecturer at large at the King's College in New York City, where he lives with his wife and daughter.