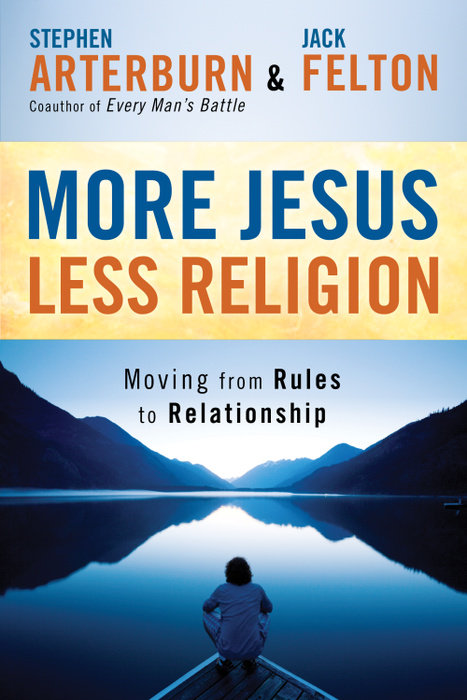 Moving from Rules to Relationship

One decade ago, best-selling authors Stephen Arterburn and Jack Felton exposed the dangers of what they called "toxic faith," helping countless believers to understand and overcome their religious misconceptions.

Now, drawing upon an additional ten years of observation and experience, these authors go one step further, offering new insights and a positive approach to the dilemma in this long-awaited follow-up to their ground-breaking work.

Be set free from man-made rules, "churchianity," and legalistic religion.

Learn to recognize serious misinterpretations of vital biblical concepts such as "accountability."

Return to the roots of a strong, obedient, yet grace-filled relationship with your Creator.

To all who want to enter into deeper joy, fuller obedience, greater influence, and a healthier experience of God, More Jesus, Less Religion points the way back to the grace of the Lord and shows what it takes to avoid the pitfalls of toxic faith.

Jack Felton is a licensed therapist and an ordained minister at New Hope Christian Counseling Center and is president and founder of Compassion Move Ministries.  Jack Felton is a frequent lecturer in the Southern California area and has numerous local and national television and radio appearances to his credit. He and his wife, Robin, and his children, Jack and Christy, live in Huntington Beach, California.