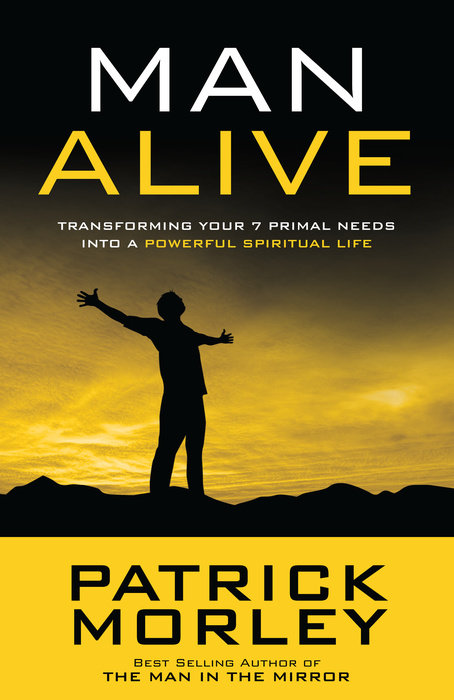 Transforming Your Seven Primal Needs into a Powerful Spiritual Life

You Don’t Have to Settle

Over the last four decades, I’ve met one-on-one with thousands of men. Most of them know that Jesus promised “a rich and satisfying life” (John 10:10), but too many are confused about what that looks like. In fact, I’d estimate that 90 percent of Christian men lead lukewarm, stagnant, defeated lives—and they hate it. When men try to put into words what’s holding them back, they invariably describe one or more of these seven symptoms:

Do you see yourself in these statements? In my experience, these inner aches and pains correspond to seven primal God-given needs that all men feel deeply. And in Man Alive, I’ll show you something surprising—God’s plan to harness that raw, restless energy you feel, pull you out of mediocrity, and propel you toward the life you were meant to live. I promise you…there is a way. No man should have to settle for half alive. You can become the man God created you to be. You can experience a powerful life transformed by Christ. In the book you’re holding, I’ll show you how.

“I’ve talked to tens of thousands of men who feel beat down and knocked around for bad decisions they've made. Some of these guys feel like such failures, they can't even imagine a heavenly Father who loves them unconditionally. To each of these men I say, you need to hear the truth and brother-to-brother encouragement that Patrick Morley delivers in Man Alive!”
—Dave Ramsey, New York Times best-selling author, nationally syndicated radio talk show host, founder of Financial Peace University

“Most men want to leave a positive moral and spiritual legacy.  Yet we know that in order to do that, we must be living out our moral and spiritual beliefs in the present. Man Alive shows how to make this desire a reality.  I highly recommend this book to men of all ages.”
—Gary Chapman, author, The Five Love Languages

“Something is missing from the average Christian man’s life, but what is it? Man Alive gives men permission to dig down and discover the fire within.”
—Craig Groeschel, Senior Pastor of LifeChurch.tv; author of Dare to Drop the Pose, Chazown, and Weird

“Man Alive reminds me how God has wired me as a man and assists me in the challenging goal of aggressively living my life as God intended.”
—Brian Doyle, Founder, Iron Sharpens Iron

“No one understands what fires men up better than my friend Pat Morley. Man Alive is a page turner that will change how you think about yourself and show you how to experience greater fulfillment in life. I highly recommend Man Alive for your personal reading or small group.”
—Norm Miller, Chairman, Interstate Batteries

“A great many men I’ve met want so much to experience the rich and abundant life Jesus promised but don’t. As a result, they feel dissatisfied, caught in conflicting emotions. Are you one? In Man Alive, Pat Morley--who has probably had more deeply personal conversations with men than anyone I know--goes straight to the heart of your dissatisfaction. He delivers a world of wisdom that will lead you to strength, confidence and clarity.”
—Bob Buford, Founder, Leadership Network, author of Halftime and Finishing Well

“Pat Morley has earned the right to be heard. And in this must-read book, his commitment to men has risen to even a higher level. If you are serious about experiencing God’s best, then Man Alive is for you.”
—Dr. Tony Evans, Senior Pastor, Oak Cliff Bible Fellowship; President, The Urban Alternative; author of Dry Bones Dancing and other books

“Dr. Patrick Morley is arguably the world’s expert on what makes men tick. His thirty years of research and ministry in thousands of churches has given him a rich perspective on what it takes to build a powerful disciple-making ministry to men. His new book, Man Alive, goes to the heart of what men urgently need today. I urge you to read it for yourself, then recommend it to another man you care about.”
—Leary Gates, president, National Coalition of Ministries to Men; founder, BoldPath Life Strategies

“Patrick Morley knows men. I know. I’m his pastor. I’ve watched God use him to transform our community during his many years of faithfully discipling men. And now, he’s written Man Alive to transform you. This book will answer your most personally compelling questions, and help you overcome the roadblocks to the abundant life. I have personally benefited from his insightful application of Scripture. His writings help me be a more effective pastor. Pat Morley is a spiritual mentor for us all!”
—Dr. Joel C. Hunter, Senior Pastor, Northland—a Church Distributed, Longwood, FL

“When we were little boys we all had big dreams about making an impact and leaving the world a better place. Yet something happened to most of us on the way to manhood. Almost inexplicably, those dreams got squeezed out. How did that happen? And is there anything we can do about it? Well, I have good news! Patrick Morley has demystified this hard-to-understand phenomenon and drafted a clear-cut plan for you to become the man God created you to be--a man fully alive!”
—H Wayne Huizenga Jr. President-Huizenga Holdings

“Pat has done it again. He hits directly where so many of us find ourselves--needing a compelling but realistic game plan to align our lives with God’s intentions.”
—Steve Reinemund Dean of Business, Wake Forest University;  Retired Chairman and CEO, PepsiCo

For three decades Patrick Morley has been regarded as one of America's most respected authorities on the unique challenges and opportunities that men face.

After spending the first part of his career in the highly competitive world of real estate development, Patrick has been used throughout the world to help men think more deeply about their lives.

In 1973 Patrick founded Morley Properties, which, for several years, was hailed as one of Florida's 100 largest privately held companies. During this time he was the president or managing partner of 59 companies and partnerships.

Every Friday morning since 1986, Patrick has taught a Bible study to approximately 5,000 men —150 men live in Orlando, Florida and the others through a Video Bible Study webcast over the Internet in all 50 states and throughout the world.
In 1989 he wrote The Man in the Mirror, a landmark book that poured from his own search for meaning, purpose, and a deeper relationship with God. With over 3,000,000 copies, this best-selling book has captured the imaginations men worldwide, and was selected as one of the 100 most influential Christian books of the twentieth century. He has written 18 books—six of which have received critical acclaim—and has readers in over 48 countries.

In 1991, Patrick founded Man in the Mirror which has impacted the lives of 10,000,000 men worldwide, has distributed 9,000,000 books, and last year worked with 30,000 church leaders to more effectively disciple men. Through his speaking and writing he is a tireless advocate for men, encouraging and inspiring them to change their lives in Christ. He has written over 500 articles to help men and leaders, has appeared on several hundred of radio and television programs, and speaks to men daily through The Man in the Mirror radio program carried over 300 stations nationwide.

"The ministry of Man in the Mirror exists," says Patrick Morley, "in answer to the prayers of all those wives, mothers, and grandmothers who have for decades been praying for the men in their lives."

Patrick Morley graduated with honors from the University of Central Florida, which selected him to receive its Distinguished Alumnus Award in 1984. He has earned a Ph.D. in Management and completed post-graduate studies at the Harvard Business School and Oxford University, and graduated from Reformed Theological Seminary. He lives in Winter Park, FL with his wife, Patsy. They have two married children and four grandchildren.

You don't have to settle

Man Alive addresses your most deeply felt needs as a man and coaches you through seven stages of spiritual transformation.

He Knows You Personally

You made all the delicate, inner parts of my body
and knit me together in my mother’s womb.
Thank you for making me so wonderfully complex!
Your workmanship is marveloushow well I know it.
You watched me as I was being formed in utter seclusion,
as I was woven together in the dark of the womb.
You saw me before I was born.
Every day of my life was recorded in your book.
Every moment was laid out
before a single day had passed


It’s one thing to believe that God loves you as one among many. It’s another thing altogether to trust that God knows what you’re going through, that He cares, and that He has the power and desire to watch over you personally.”

He Will Not Be Denied

“Your heavenly Father will never desert you, never abuse you, never fail to forgive you, never hold back His grace, and never condition His love on your performance. He’s determined. He is in relentless pursuit of you, and He will not be denied To be a son who is relentlessly pursued like that can turn a man around in his tracks.”

Do you see it? Jesus made a direct connection between knowing the Bible and leading a powerful life. Lukewarm men are in error because they “don’t know the Scriptures” and therefore “don’t know the power of God.” Their capabilities don’t equal their intentions. Without the right training, their soil remains bare, stony, and full of weeds. And as you’ll soon see, by “know the Scriptures,” Jesus was talking about a lot more than mere head knowledge.

On the other hand, transformed men “truly hear and understand God’s word and produce a harvest.” Digging into the Word of God is easily the number one factor that differentiates men who have tapped into God’s power.”

Pull out the newest bill in the highest denomination you have. Look at it carefully. If it’s new, it looks crisp, doesn’t it?

Okay, now I want you to crumple up that bill into a little wad. Pound it with your fist if you like. I’ll wait

Now unwad the bill and smooth it out. It doesn’t look so crisp anymore, does it? So do you still want it? Of course you do.

Next I want you to crumple the same bill up again, then stomp on it several times. If you do it on a dirty floor, that’s even better. I’ll wait again

Did that feel good? Now smooth out the bill again. It’s starting to look a little tattered, isn’t it?

Do you still want it? Of course you do! Why is that? Because the condition of [ … ]