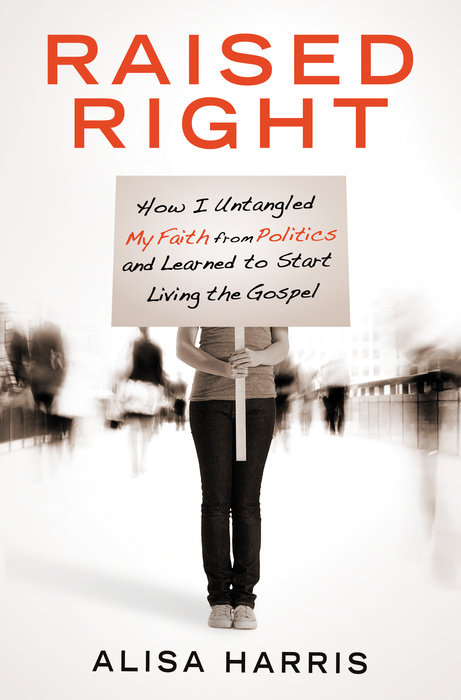 How I Untangled My Faith from Politics

Meet the new breed of Christians shaping our culture.

Alisa Harris grew up in a family that actively fought injustice and moral decay in America. She spent much of her childhood picketing abortion clinics and being home-schooled in the ways of conservative-Republican Christianity. As a teen she firmly believed that putting the right people in power would save the nation.

But as she moved into adulthood, Alisa confronted unexpected complexities on issues that used to seem clear-cut. So, she set about evaluating the strident partisanship she had grown up with, considering other perspectives while staying true to the deep respect she held for her parents and for the Christian principles that had always motivated her.

Raised Right is not only an intriguing chronicle of Alisa’s personal journey; it also provides a fascinating glimpse into the worldview of a younger generation of faith––followers of Christ who believe that the term “Christian” is not synonymous with a single political party or cultural issue.

Whether you are moderate, conservative, or progressive, Raised Right will prompt you to consider more deeply what it means to affirm Christ-like justice, mercy, and righteousness in the current cultural landscape. And it will give you a deeper understanding of how the new generation of Christians approaches the intersection of faith and politics.

“Journalist [Alisa] Harris gives a face and a voice to America’s younger generation, offering herself up as a case study of Christian youth caught in a partisan nation.… Young Americans will identify with her coming-of-age struggles and passion for weeding out injustice. Right-wing politicians and older generations of Christians should pay close attention in order to understand, and perhaps empathize with, her demographic.”
—Publishers Weekly

“Endorsements to co “A wonderful story for political misfits of all shapes and colors. Harris invites you to hop off the political bandwagon and to walk with her down the narrow way that leads to life. And she reminds you not to veer too far off the path to the left or to the right, lest you get confused and can’t find the way home again.”
—Shane Claiborne, author, activist, and recovering sinner, www.thesimpleway.org

“Raised Right demonstrates that the evangelical stampede to the far right in the 1980s has produced a generational backlash, as young evangelicals like Alisa Harris encounter the Hebrew prophets and the words of Jesus. This is the most encouraging book about evangelicals and politics I have read in a very long time.”
—Randall Balmer, Columbia University, author of Thy Kingdom Come: How the Religious Right Distorts the Faith and Threatens America

“Raised Right is funny, insightful, and packed with truth. Harris speaks on behalf of a generation of culture warriors longing for a more peaceful way forward. Those who grew up in the trenches will relate to every page.”
—Rachel Held Evans, author of Evolving in Monkey Town

“In Raised Right, Alisa Harris paints a fascinating picture of how the same religious devotion can send succeeding generations to opposite sides of the political battlefield. And while her story may be more common than ever, it’s uncommonly told. Alisa’s voice is fresh, honest, gracious, and provocative in all the right places. An enthralling and illuminating read.”
—Jason Boyett, author of O Me of Little Faith: True Confessions of a Spiritual Weakling

“Alisa Harris is a smart, fearless, gracious writer who, in her memoir Raised Right, showcases a deft mature-beyond-her-years honesty and kindness when sharing her affecting story of growing up in a politics-and-faith-charged environment. But the brilliance of Raised Right shines brightest when Harris begins confessing—often with a self-deprecating spin—the personal and spiritual unraveling that happens when she begins to unmarry her faith from her politics. Ultimately, hope wins throughout as Harris discovers small bits of humble truth along the journey. And because narrative in Raised Right is rich yet familiar, readers will discover small bits of their own.”
—Matthew Paul Turner, author of Churched and Hear No Evil

“Raised Right chronicles Alisa Harris’s journey from an evangelical childhood community steeped in the politics of James Dobson to an evangelical young adulthood where the politics of Barack Obama are preferred. It is engaging and well written, and it will be very illuminating to anyone who wants to understand the changes afoot among youth raised evangelical and what those changes will mean for American politics.”
—Jonathan Dudley, author of Broken Words: The Abuse of Science and Faith in American Politics

Alisa Harris is a journalist living in New York City who enjoys writing in quirky coffee shops. A 2007 graduate of Hillsdale College, she has worked as a college instructor in writing and journalism. Her writing has been published in WORLD, the Farmington Daily Times, Albuquerque Journal, and Detroit Free Press.