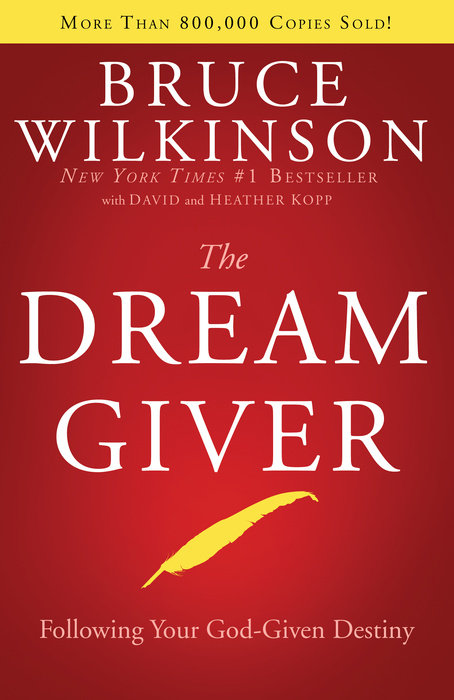 About The Dream Giver

Bestselling author Bruce Wilkinson shows how to identify and overcome the obstacles that keep millions from living the life they were created for. He begins with a compelling modern-day parable about Ordinary, who dares to leave the Land of Familiar to pursue his Big Dream. With the help of the Dream Giver, Ordinary begins the hardest and most rewarding journey of his life. Wilkinson gives readers practical, biblical keys to fulfilling their own dream, revealing that there's no limit to what God can accomplish when we choose to pursue the dreams He gives us for His honor.

Welcome to a little story about a very big idea. This compelling modern-day parable tells the story of Ordinary, who dares to leave the Land of Familiar to pursue his Big Dream.

You, too, have been given a Big Dream. One that can change your life. One that the Dream Giver wants you to achieve. Does your Big Dream seem hopelessly out of reach? Are you waiting for something or someone to make your dream happen?

Then you’re ready for The Dream Giver.

Let Bruce Wilkinson show you how to rise above the ordinary, conquer your fears, and overcome the obstacles that keep you from living your Big Dream.

You were made for this. Now it’s time to begin your journey.

Bruce Wilkinson is recognized as one of the world's foremost Christian teachers and speakers. He is best known, though, as the author of the New York Times #1 bestseller, The Prayer of Jabez, and other bestsellers, including A Life God Rewards, Secrets of the Vine, and The Dream Giver. He is the founder of WorldTeach, a global initiative to train Bible teachers in every nation. Wilkinson also founded Dream for Africa, a humanitarian agency that has taken on AIDS, orphan care, and hunger in sub-Saharan Africa. Bruce and his wife, Darlene, have three children and six grandchildren. They live outside Atlanta.

Are you living your dream or just living your life? Read the first chapter of The Dream Giver. Let Bruce Wilkinson show you how to rise above the ordinary, conquer your fears, and overcome the obstacles that keep you from living your Big Dream.

“Do you believe every person on earth was born with a dream for his or her life?
No matter where I travel in the worldwhether among hard-charging Manhattan urbanites or villagers in southern AfricaI have yet to find a person who didn’t have a dream. They may not be able to describe it. They may have forgotten it. They may no longer believe in it.
But it’s there.

I call this universal and powerful longing a Big Dream. Like the genetic code that describes your unique passions and abilities, your Big Dream has been woven into your being from birth. You’re the only person with a Dream quite like yours.
And you have it for a reason: to draw you toward the kind of life you were born to love!”

Excerpted from The Dream Giver by Bruce Wilkinson

“Not long ago and not far away, a Nobody named Ordinary lived in the Land of Familiar.

Every day was pretty much the same for Ordinary. In the mornings he got up and went to his Usual Job. After work, he ate almost the same dinner he’d eaten the evening before. Then he sat in his recliner and watched the box that mesmerized most Nobodies on most nights

Time passed. Then one morning Ordinary woke up with these words echoing in his mind: What you’re missing, you already have

Could it be? Ordinary looked and looked. And then he discovered that in a small corner of his heart lay a Big Dream. The Big Dream told him that he, a Nobody, was made to be a Somebody and destined to achieve Great Things